Former general Prabowo Subianto, one of the two candidates in Indonesia's presidential election, has demanded vote counting stop until alleged fraud is investigated and settled.

(From L to R) Indonesia President Susilo Bambang Yudhoyono stands beside presidential candidates Prabowo Subianto and Joko “Jokowi” Widodo during a meeting at the presidential palace in Jakarta July 20. Mr Yudhoyono urged Indonesians on Sunday to “safeguard the final chapter” of the country's presidential election, saying the July 9 vote was democratic and peaceful. (Reuters photo)

The winner of the presidential election is expected to be announced Tuesday, soon after the tally is completed. The expected denial of defeat by Mr Prabowo, however, may lead the country into uncertainties and possible violence as many have feared.

Reuters reported Indonesia's outgoing leader came within a whisker Monday of telling Mr Prabowo to admit defeat so that the country's most bitterly fought leadership contest could be resolved.

Indonesia's election commission is on course to release the results of the July 9 presidential election by tomorrow, Bloomberg News reported.

Private tallies of the 130 million votes show Jakarta governor Joko "Jokowi" Widodo won by about five percentage points over Mr Prabowo who has spent the last 10 years preparing for his presidential bid.

On the other side, four other pollsters, widely known to be unreliable and hired by Mr Prabowo's camp, declared him the victor. As a result, both candidates have claimed victory.

Mr Prabowo's camp, however, insisted massive fraud had occurred during the vote-counting process and demanded the General Election Commission to investigate the alleged cheating, Kyodo said.

Later, Mr Prabowo also demanded a revote in some areas as recommended by the Election Monitoring Agency. The agency has recommended holding a revote in 5,802 polling stations in Jakarta to the election commission due to some alleged fraud, such as unsealed ballot boxes.

"We demanded that the election commission stop the national tally until the problems recommended by the monitoring agency are settled," Idrus Marham, a politician from Golkar, one of the parties supporting Mr Prabowo's candidacy, told a Sunday press conference.

The election commission insisted will not suspend the counting. The monitoring agency's commissioner, Nelson Simanjuntak, also said it "didn't find any fraud, but only carelessness, so it's unnecessary to stop the counting."

According to the law, however, presidential candidates can challenge the commission's ruling on the election's winner to the Constitutional Court. Bloomberg reported that both candidates have three days to challenge the results once they are announced, a move that may create uncertainty for voters and investors in the world's third-largest democracy. 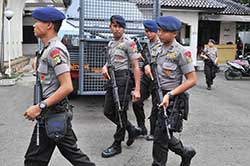 Indonesian policemen walk outside the offices of the National General Commission while commission members hold national tabulation in Jakarta on July 20. (Reuters photo)

Mr Prabowo's camp plans to deploy about 50,000 supporters to the election commission on Tuesday when the results are announced, raising concerns of possible violence. To avoid any possible clash, however, Mr Widodo has called on his supporters not to go to the streets on the day.

The national police and military have deployed nearly 300,000 personnel across the vast archipelago of 240 million people. Security has also been beefed up around the election commission office (KPU) but there has been no word of any violence.

"We don't anticipate the KPU to be a hot spot for violence," national police spokesperson Boy Rafli Amar told Reuters. "At the same time, we ask the public not to assemble there so that the KPU officials can continue their work in a conducive atmosphere."

Ensuring a calm transfer of power is crucial for Indonesia as it seeks to assure investors the nation's closest election in more than a decade won't erode the democratic and economic progress of the past 16 years.

"It is utterly unrealistic to delay the results announcement even as it is something guaranteed by the constitution," Emrus Sihombing, a political communications lecturer at Universitas Pelita Harapan in Tangerang outside Jakarta, told Bloomberg.

Political analysts said, however, it is ironic for Mr Prabowo to seek a suspension of vote counting while having already claimed victory. "He might have panicked," political analyst Ari Dwipayana of Gadjah Mada University said.

Late Sunday, trying to calm the heated political situation, President Yudhoyono held a gathering for the two presidential candidates in efforts to create peace among their supporters.

"Our unity, brotherhood and togetherness as a nation is really important. The price will be costly when a nation is divided. To reunite it will not be something easy to do," he said.