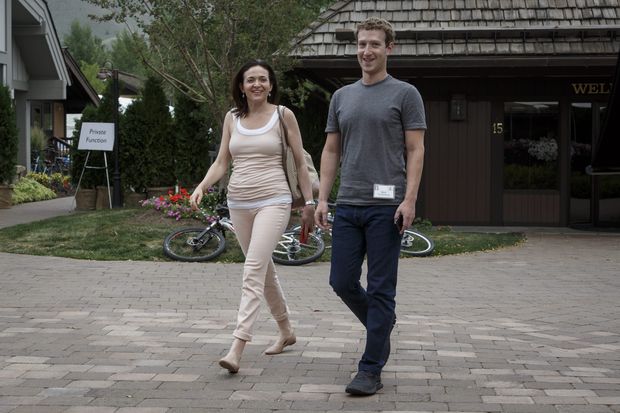 The Facebook Inc chairman added $1.6 billion to his fortune on Friday after the world’s largest social network closed at a record. The surge elevated the 30-year-old’s net worth to $33.3 billion, moving him past Mr Brin, 40, and Mr Page, 41, as well as Amazon.com Inc. CEO Jeff Bezos, 50, on the Bloomberg Billionaires Index.

Mr Zuckerberg is No. 16 on the ranking. The Google founders are 17th and 18th. Mr Bezos occupies the 20th spot.

“He’s just getting started,” David Kirkpatrick, author of The Facebook Effect, said in a telephone interview. “He’s going to become the richest person on the planet.”

Facebook has jumped 183% in the past 12 months, the biggest rally in the Standard & Poor’s 500 Index, according to data compiled by Bloomberg. The company trades at 82-times reported earnings, compared to a multiple of 18.2 for the S&P 500. Google is up 7.5% for the year.

Mobile promotions accounted for 62% of ad sales, up from 59% in the prior period. Net income more than doubled to $791 million, with profit excluding some items at 42 cents a share, above the projection of 32 cents. In total, Facebook accounted for 5.8% of worldwide digital ad revenue in 2013, up from 4.1% in 2012, according to EMarketer Inc.

The company’s performance also propelled the fortunes of other Facebook shareholders, including Dustin Moskovitz, the 30-year-old who started the social network with Mr Zuckerberg at Harvard University a decade ago, and Sheryl Sandberg, Facebook’s 44-year-old chief operating officer who became one of the world’s youngest female billionaires in January. Ms Sandberg owns about 9.9 million shares valued at $740 million and has collected more than $550 million in share sales.

“The company’s success is growing by the minute,” Mr Kirkpatrick said. “There’s no sign it’s going to slow anytime soon.”

Amazon reported its biggest quarterly loss since 2012 on Friday as Mr Bezos builds more distribution warehouses, adds grocery deliveries and develops new smartphones and tablets. The world’s largest online retailer had a second-quarter loss of $126 million, wider than the $7-million loss a year earlier, even as revenue climbed 23% to $19.3 billion. The Seattle-based company is down 10% for the year, and was down another 8% in extended trading.

Bill Gates remains the world’s richest person with an $84.7-billion fortune. The Microsoft Inc chairman’s net worth has grown 7.9% this year, with five of his biggest holdings, including Microsoft, Canadian National Railway Co and Republic Services Inc, accounting for almost $4 billion of the gain.

The 58-year-old, who controls the majority of his fortune through holding company Cascade Investment Llc, also has collected about $400 million in dividends this year.

Mr Gates is followed by Mexican telecommunications tycoon Carlos Slim, who has a $78.8-billion fortune.