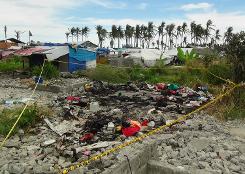 The remains of a tent serving as temporary shelter for victims of Super Typhoon Haiyan, is pictured in Tacloban City Leyte province, central Philippines on May 28, 2014

Haiyan struck the central islands on November 8, leaving nearly 8,000 people dead or missing from its monster winds of up to 275 kilometres an hour (171 mph) that generated giant waves which obliterated coastal communities.

The storm tore across an area the size of Portugal, destroying or damaging 1.14 million homes and about 20 billion pesos' worth of agricultural crops, according to government data.

"There will be a massive infusion of resources.... We will have accomplished a lot between now and January," Aquino special adviser on Haiyan rehabilitation Panfilo Lacson said as he unveiled the 170.9 billion-peso ($3.9 billion) master plan.

The balance is to be funded by the 2015 and 2016 national budgets, and about 80 percent of the projects should be completed by the time the Philippines elects a new leader in mid-2016, Lacson said.

He said part of the amount would be spent resettling about 200,000 families displaced by storm surges or living in areas deemed vulnerable to future disasters.

The Philippines is hit by about 20 storms or typhoons each year. Typhoon Rammasun killed 98 people and left five others missing in provinces around Manila last month.

Lacson defended the long time it took the government to come up with its rehabilitation plan.

"It's not that easy to come up with a plan," he said, adding the government could not just release funds without a solid plan.