Solomon Islander who helped save JFK dies at 93
World

Solomon Islander who helped save JFK dies at 93

HONIARA - A Solomon Islander who helped save John F. Kennedy when a Japanese destroyer sank the future US president's patrol boat during World War II has died aged 93, his family said Monday. 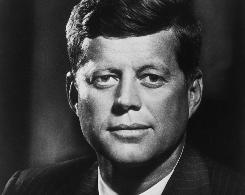 A Solomon Islander who helped save John F. Kennedy, shown here in 1960, when a Japanese destroyer sank the future US president's patrol boat during World War II has died aged 93, his family says

Eroni Kumana and his fellow islander Buiku Gasa were out in a canoe in 1943 when they came across the injured Kennedy, who was then a naval lieutenant, and members of his crew stranded on a coral atoll.

The pair helped the Americans survive and Kennedy went on to become the 35th president of the United States, keeping a coconut from the ordeal as a paperweight on his White House desk.

Kumana's son Esori said his father passed away surrounded by family members on Saturday aged 93 and was laid to rest on his home island of Ronongga on Monday.

"It was very sad (but) he lived a full life and we are proud of him," he told AFP via telephone from the island, where villagers were preparing a feast in Kumana's honour.

Kennedy's boat PT-109 was on a night-time patrol when a Japanese destroyer suddenly loomed out of the dark and sheared the wooden vessel in half, according to the Smithsonian magazine.

Spilled fuel ignited in the water, causing both the Japanese and other US PT boats to assume the 13-man crew had all perished in the shark-infested waters.

In fact, 11 of them were still alive and when dawn broke Kennedy led his crew on a five-kilometre (three-mile) swim from the boat's wreckage to a coral atoll.

Kennedy, who had suffered a ruptured spinal disc, towed a badly burned crewman behind him during the marathon swim.

Eventually Kumana and Gasa passed in their canoe. They helped collect food for the crew and Kennedy sent them off to get help with a message etched into the shell of a coconut, reading: "Nauru Isl commander/native knows posit/he can pilot/11 alive/need small boat/Kennedy".

After being rescued, Kennedy retrieved the coconut and had it encased in plastic, using it as a paperweight throughout his post-war political career. It is still on display in the Kennedy Museum in Boston.

Kumana and Gasa were invited to Kennedy's 1961 inauguration but were unable to make the trip to Washington.