The UN said Wednesday the death toll in Ukraine had soared with nearly 1,000 killed in two weeks, as Kiev signalled it could compromise on letting in Russian aid. 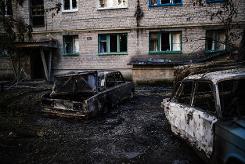 Russian humanitarian convoy waits outside Voronezh, some 400 km outside Moscow on August 13, 2014

After earlier vowing to block a massive Russian convoy headed for its borders, Kiev said it could allow the aid to enter the country after it was inspected by Ukrainian border guards and foreign monitors.

Ukraine has raised fears the convoy of nearly 300 lorries could be a "Trojan horse" bringing military help to pro-Moscow insurgents who launched a rebellion in the country's east.

Tensions have risen as the convoy rumbled toward the border, with Western capitals fearing it could spark an escalation in a conflict that has already brought ties with Russia to their lowest point since the Cold War.

But as the humanitarian crisis in the east worsened, President Petro Poroshenko's office suggested the much-needed aid could be allowed in to avoid what it called a "large-scale invasion" by Russia.

The proposal would allow aid for the hard-hit eastern city of Lugansk "to cross over the nearest border post" after it had been checked by Ukrainian officials and monitors from the Organisation for Security and Cooperation in Europe (OSCE), presidential spokesman Svyatoslav Tsegolko said.

The mission would then be allowed to travel across rebel-controlled territory to Lugansk where the "Red Cross would distribute aid to civilians," he said.

It was unclear if the lorries or just their content would be allowed into Ukraine. The OSCE could not confirm to AFP if it would be involved.

Russia insists that it coordinated the mission with the International Committee of the Red Cross and that the convoy does not include military personnel.

The convoy was apparently stalled for much of Wednesday at an airfield in the southwestern Russian town of Voronezh.

Russian journalists with the convoy had said it was due to arrive at the border by evening.

There was no doubt of the need for aid.

Four months of fierce battles between Ukrainian forces and insurgents have left rebel strongholds in the east without power, running water or fuel, and with dwindling food supplies.

Rebel fighters have been losing ground to government forces and as the fighting has intensified the UN human rights agency said Wednesday that the number of dead had doubled in two weeks.

As of Sunday the death toll had hit 2,086, up from 1,129 on July 26, the agency said, adding that the figures should be considered "very conservative".

The government pressed on with an offensive against rebel-held cities, with Ukraine's military saying 11 servicemen had been killed and 41 injured in the previous 24 hours.

The ultra-nationalist group Pravy Sektor (Right Sector), which has been fighting with government forces, said that 12 of its members had been killed in an ambush in the main rebel stronghold of Donetsk.

Five civilians were also injured as mortar fire continued to pound the city, already surrounded by the army, local authorities said, while the military said a massive attack on a town south of Lugansk left an unknown number of people wounded.

Some 285,000 people have fled their homes in four months of what the Red Cross has officially deemed a civil war.

"First they delivered tanks, Grad missiles, terrorists and bandits to shoot Ukrainians and now they are delivering water and salt," he told a cabinet meeting.

Moscow should have sent empty lorries "to take back their bandits" rather than sending aid, he said.

Moscow denies it is seeking to boost the insurgents, but NATO says it has massed 20,000 troops along the border with its ex-Soviet neighbour.

Russian President Vladimir Putin was meanwhile to host meetings of top ministers and lawmakers on Thursday in Crimea, the southern peninsula Russia annexed from Ukraine in March.

Life under rebel rule in an Ethiopian holy city