Israel warned Sunday it would refuse any long-term truce deal that failed to satisfy its security needs as Gaza ceasefire talks resumed in Cairo. 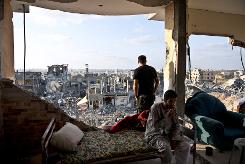 Hamad (R) and Mohammed (L) sit in a destroyed apartment building where they lived with their families in the neighborhood of Al-Shaas in the north of the Gaza Strip enclave on August 16, 2014

Egyptian-brokered indirect negotiations between Israel and the Palestinians are taking place during a five-day lull in the fighting that is due to expire at midnight (2100 GMT) on Monday.

The aim is to broker a long-term arrangement to halt over a month of bloody fighting which erupted on July 8 and has so far claimed 1,980 Palestinians lives and 67 on the Israeli side.

But as the Israeli team landed in Cairo, Prime Minister Benjamin Netanyahu said they would not agree to any proposal which did not offer a clear answer to Israel's security needs.

"The Israeli delegation in Cairo is acting with a very clear mandate to stand firmly on Israel's security needs," said Netanyahu.

"Only if there is a clear answer to Israel's security needs, only then will we agree to reach an understanding."

The talks began on Sunday afternoon at the headquarters of Egyptian intelligence, with four Gaza officials, among them Hamas and Islamic Jihad delegates, due later the same day.

It was the first time the teams had sat down since Wednesday after the negotiators returned home for consultations with their respective political masters.

Cairo airport sources said the Israeli delegation arrived mid-morning from Tel Aviv, while a Palestinian team from Ramallah flew in around the same time via Amman.

In Gaza, although millions enjoyed a weekend free of the deadly fighting, residents are now facing other battles including the struggle to cope with a chronic water shortage.

And United Nations humanitarian chief Valerie Amos said during a visit to Iran that it will take "months to rebuild" UN hospitals, schools and shelters serving Palestinians in Gaza, damaged by the Israeli bombardment of the coastal territory.

A total of 97 UNRWA installations in the Gaza Strip, including health and food distribution centres as well as schools, have been damaged.

Israel, meanwhile, announced that Gaza fishermen barred from fishing since July 8 can resume their activities.

"As a sign of goodwill, Israel has allowed fishing off the Gaza Strip up to 3 nautical miles," a government official told AFP on condition of anonymity.

In Ramallah, Palestinian president Mahmud Abbas reiterated his commitment to the Egyptian proposal.

"Our goal is to stop fighting and we are committed to the Egyptian initiative and nothing else," he said.

In Gaza, Hamas spokesman Sami Abu Zuhri said the Palestinians would not back down from their demands, starting with a lifting of Israel's eight-year blockade of the territory.

"There is no way back from this. All these demands are basic human rights that do not need this battle or these negotiations," he told AFP.

"The only way to have security is for Palestinians to feel it first and have the blockade lifted."

But Netanyahu warned that Hamas, which he said had suffered a major military blow, would not walk away from the talks with any political success.

"If Hamas thinks it will make up for its military losses with a political achievement, it is wrong."

With their demands seemingly irreconcilable, the Egyptian mediators have their work cut out to hammer out a deal that each side can present as some kind of achievement.

Palestinian delegation head Azzam al-Ahmad said he was optimistic that an agreement could be reached.

"We have high hopes of reaching an agreement very soon, before the end of the truce, and perhaps even, very quickly, for a permanent ceasefire," he told AFP.

But Israeli Science Minister Yaakov Perry, a former head of the Shin Bet internal security agency who participates in security cabinet meetings as an observer, was less confident.

"The differences of opinions and disagreements are vast, and the chance (to reach an agreement) is not big," Perry told military radio.

Talks are expected to resume on the basis of an Egyptian proposal, seen by AFP, which calls for a lasting ceasefire beyond Monday midnight, and new talks on the thorniest issues, including demands for a seaport and airport in Gaza, which will begin in a month's time.

Negotiations about handing over the remains of two Israeli soldiers in exchange for the release of Palestinian prisoners in Israeli jails would also be discussed in a month.

The European Union said a durable ceasefire must be accompanied by lifting closures on Gaza and called on "all terrorist groups" in the territory to disarm.