Ukraine on Monday accused pro-Russian rebels of killing dozens of civilians fleeing the war-torn east, as crisis talks between Kiev and Moscow failed to halt months of bloodshed. 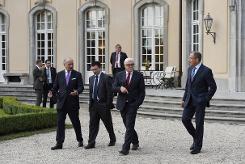 A Ukrainian soldier gestures as he talks with children on August 18, 2014 in the small city of Popasna

Kiev's military said insurgents using Russia-supplied weapons shelled adults and children in a convoy with white flags on a road from the restive city of Lugansk, leading to "dozens of dead".

The allegations came after marathon crisis talks in Berlin brought no consensus on how to end the conflict, and President Petro Poroshenko said Kiev was pressing on with its drive to oust rebels, having "laid siege to cities most controlled" by them.

"The convoy had white flags and was marked as civilian," he said at a briefing. Kiev believes it was shelled from mortar guns and Grad rocket systems supplied from Russia and was "completely destroyed".

"We ask that any videos from the scene are not released to the public, because they are atrocious," he added.

Lugansk has been the hardest-hit city still controlled by rebels, where water and power have been cut off for more than two weeks and food is becoming increasingly scarce.

The rebel leader of neighbouring "Donetsk People's Republic", Alexander Zakharchenko, flatly denied any attacks on civilians, blaming Kiev's own troops for the strike.

"Not a single convoy of refugees was shot at in the Lugansk region," he told journalists at a briefing.

A five-hour meeting in Berlin between the foreign ministers of Ukraine, Russia, France and Germany broke up without agreement on how to end more than four months of conflict that has killed over 2,100 people and left the region facing a humanitarian catastrophe.

Moscow has demanded that Ukraine government forces halt an offensive against main separatist strongholds, while Kiev accuses Russia of pouring in more arms to save the unravelling insurgency.

Klimkin said Russia "is not ready to recognise the facts" of the continuing flow of weapons and mercenaries across the border.

He added that Kiev was looking forward to a "very interesting visit" by Germany's Angela Merkel Saturday, one day before Ukraine celebrates Independence Day.

The Ukrainian presidency said Monday evening that rebel boasts of receiving Russia-trained fighters and various weaponry including tanks forced Kiev to "look at the military operation in new light" and "continue the offensive".

Zakharchenko last week said his troops had gotten a fresh injection of 1,200 fighters "trained in Russia", though Moscow was quick to deny sending any help to the insurgency across the porous frontier.

NATO lashed out at Russia, accusing it of leading a "double game" in Ukraine in a piece co-authored by the head of the alliance Anders Fogh Rasmussen and top commander Philip Breedlove published in the Wall Street Journal.

They urged Moscow to "pull back its troops, stop using hybrid-warfare tactics, and engage with the international community", adding that there was "evidence of a disruptive Russian presence inside Ukraine."

Fierce fighting surrounded the second-largest rebel bastion Lugansk over the weekend as Kiev said its troops had battled their way into an outlying suburb.

Nine soldiers were killed in clashes with insurgent fighters across the strife-torn east over the past 24 hours, a military spokesman said Monday.

The army said rebels in the Lugansk region also shot down a Ukrainian warplane on Sunday.

In Ukraine's largest rebel stronghold of Donetsk people were queueing to buy drinking water from kiosks after fighting forced local authorities to turn off supplies.

The city hall urged residents late Sunday to stock up as water was turned off and promised to organize deliveries of cisterns to residential neighbourhoods.

The United Nations estimates over 285,000 people have already fled the fighting in east Ukraine.

A controversial Russian aid convoy meanwhile still waited to be checked near Ukraine's restive border as negotiations dragged on about allowing it to cross into rebel-held territory amid Kiev's fears that it is a ploy to prop up the ailing insurgency.

"We are still waiting for security guarantees for the convoy," said Galina Balzamova, spokeswoman for the International Committee of the Red Cross, which is overseeing the controversial cargo shipment.