PARIS - Two satellites for Europe's rival to GPS were lifted into space on Friday to boost the Galileo constellation to six orbiters of a final 30, the European Space Agency (ESA) said. 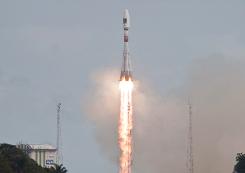 A handout photo released by ESA-CNES-ARIANESPACE on August 22, 2014 shows a Russian-built Soyuz taking off from Europe's Kourou space centre, in French Guiana

The launch of satellites Doresa and Milena, the first with full operational capability, brought the system a step closer to becoming fully functional.

"The deployment of the constellation will now gather pace, with six to eight satellites launched per year," the ESA said in a statement.

"The final constellation will consist of 24 satellites expected to be ready in 2017 and complemented by six in-orbit spares."

The pair of orbiters were launched on a Russian-built Soyuz rocket from Europe's Kourou space centre in French Guiana at 1227 GMT as scheduled, after a 24-hour bad weather delay.

Minutes later it shed its four boosters and faring -- the nose cone that protects the craft in the early stages of flight.

At three hours and 47 minutes after launch, the satellites separated from the mother ship to enter into free-flight orbit.

"These two satellites are the first of a new type of satellite that are fully owned by the EU, a step towards a fully-fledged European-owned satellite navigation system," said the European Commission, which funds the project.

The 5.4-billion-euro ($7.2-billion) Galileo constellation is designed as an alternative to the existing US Global Positioning System (GPS) and Russia's Glonass, and will have search and rescue capabilities.

Four Galileo satellites have been launched before Friday -- the first pair in October 2011 and the second a year later.

They are the nucleus of the constellation orbiting Earth at an altitude of 23,500 kilometres (14,600 miles), and will later be brought to full operational capability.

The launch of the latest pair, named by two European schoolchildren who had won a drawing competition, had been delayed for over a year due to what the ESA described as "technical difficulties in the setting up of the production line and test tools".

Launch firm Arianespace said Thursday it had signed a deal with the ESA to launch 12 more satellites "from 2015 onwards".

The ESA has previously said full Galileo services were "scheduled for the decade's end".

In March last year, the agency announced the first four test satellites had passed a milestone by pinpointing their first ground location, with an accuracy of between 10 and 15 metres (32 to 49 feet).

For its ninth liftoff from the Guiana Friday, the Soyuz rocket carried a total load of 1.6 tonnes, including the two satellites weighing 730 kilos (1,600 pounds) each.

"We are extremely proud to have sent the first two operational satellites in the Galileo constellation into orbit today," Arianespace chairman Stephane Israel said in a statement.

What we know about the Taliban's political agenda

Myanmar will not address world leaders at UN, Afghanistan will