PARIS - A new invention can cheaply and accurately diagnose malaria infection in just a few minutes using only a droplet of blood, researchers have reported in the journal Nature Medicine. 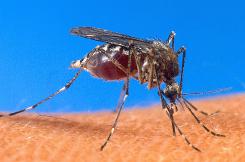 A new invention can cheaply and accurately diagnose malaria infection in just a few minutes using only a droplet of blood, researchers have reported in the journal Nature Medicine

The tool could replace the laborious, error-prone method by which a lab technician looks for malaria parasites in blood through a microscope, they said.

While that method is considered the gold standard in malaria diagnostics today, it depends on the technician's skill in interpreting the image, the quality of the microscope and lab chemicals and even on the thickness of the blood smear on the slide itself.

The touted replacement is an "inexpensive" desk-top mini-lab that, according to its inventors, can detect fewer than 10 malaria parasites per microlitre of blood, using a sample of less than 10 microlitres -- equivalent to a small drop from a finger prick.

While malaria is both preventable and treatable, it killed an estimated 627,000 people in 2012, mainly children in Africa, according to the World Health Organization.

That year there was also an estimated 207 million cases worldwide, and the WHO says current funding levels are "far below" what is needed to eradicate the disease.

It measures the crystals metabolised by the Plasmodium parasite after the creature -- which is transmitted to humans in mosquito bites -- feasts on nutrient-rich haemoglobin in the blood.

These waste-product crystals, which are called hemozoin, contain a minute amount of iron, making them ever-so-slightly magnetic.

The presence of the tiny particles disrupts the synchronous spin, or resonance, in hydrogen atoms that are exposed to a magnetic field.

The more particles there are, the faster this "synchrony" is disrupted.

That means the test can not only tell when someone has been infected, it can also see whether treatment is working, as shown by a fall in the number of parasites in a patient's blood.

The desktop kit uses a magnet about a quarter of the size of powerful, expensive MRI scanners, said scientists at the Massachusetts Institute of Technology (MIT), who undertook the venture with colleagues from the Singapore-MIT Alliance for Research and Technology, or SMART.

"There is real potential to make this into a field-deployable system, especially since you don’t need any kind of labels or dye," said Jongyoon Han, an MIT professor of electrical and biological engineering.

"This system can be built at a very low cost, relative to the million-dollar MRI machines used in a hospital," said Weng Kung Peng, a research scientist at SMART.

"Furthermore, since this technique does not rely on expensive labelling with chemical reagents, we are able to get each diagnostic test done at a cost of less than 10 [US] cents (7.5 cents of a euro)."

The team is running field tests in Southeast Asia and already looking at potential enhancements to the prototype.

It is working on portable version "about the size of a small electronic tablet" and exploring the possibility of using solar energy as a power source, MIT said.

This would be a boon for sub-Saharan Africa, which accounts for most of the world's malaria fatalities.

US announces first Omicron case in traveller returning from S.Africa

US warns Russia of 'high-impact' sanctions if invades Ukraine