MINSK - Pro-Russia rebels on Friday said they had agreed a ceasefire with the Ukrainian government but stressed they still wanted to split from the ex-Soviet country. 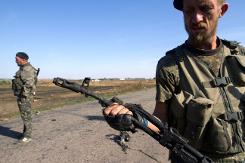 A Pro-Russian separatist holds a destroyed weapon recovered on the outskirts of the eastern Ukrainian village of Novokaterinovka, on September 4, 2014

"Ceasefire does not mean a change in our goal to split from Ukraine," rebel representative Igor Plotnitsky told reporters.