Surging levels of carbon dioxide sent greenhouse gases in the atmosphere to a new record in 2013, while oceans, which absorb the emissions, have become more acidic, the UN said on Tuesday. 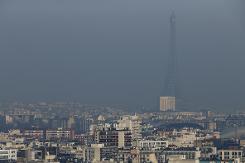 Smoke rises from chimneys of a factory in Haubourdin, northern France, on October 31, 2013

"We know without any doubt that our climate is changing and our weather is becoming more extreme due to human activities such as the burning of fossil fuels," said Michel Jarraud, the head of the World Meteorological Organization (WMO) that released a report on the issue on Tuesday.

"We must reverse this trend by cutting emissions of CO2 and other greenhouse gases across the board," Jarraud said in a statement.

"We are running out of time," he warned.

Global concentrations of CO2, the main culprit in global warming, soared to 396 parts per million last year, or 142 percent of pre-industrial levels -- defined as before 1750.

That marked a hike of 2.9 parts per million between 2012 and 2013 alone -- the largest annual increase in 30 years, according to the Greenhouse Gas Bulletin.

The report came ahead of a September 23 summit called by UN Secretary General Ban Ki-moon to try to build momentum for change ahead of talks in Paris next year aimed at forging a historic climate deal that will take effect in 2020.

The UN is seeking to limit global warming to two degrees Celsius (3.6 degrees Fahrenheit) over pre-Industrial Revolution levels, but scientists say current emission trends could hike temperatures to more than twice that level by century's end.

"We have the knowledge and we have the tools for action to try to keep temperature increases within two degrees Celsius to give our planet a chance and to give our children and grandchildren a future," Jarraud said, insisting that "pleading ignorance can no longer be an excuse for not acting".

Professor Dave Reay, chair in Carbon Management at the University of Edinburgh reacted with dismay to the report.

"This is the litmus test when it comes to our efforts to reduce emissions and on this evidence we are failing," he said.

Tuesday's report also showed that so-called radiative forcing, or the warming effect on our climate attributed to greenhouse gases like CO2, increased 34 percent from 1990 to 2013.

A quarter of emissions are absorbed by the oceans, while another quarter are sucked into the biosphere, naturally limiting rates of warming gases in the atmosphere.

But CO2 remains in the atmosphere for hundreds of years and in the oceans for even longer.

The gases stored in the oceans also have "far-reaching impacts", WMO warned, since more CO2 in the water leads to increased acidity, altering the ocean ecosystem.

And things will only get worse, Jarraud said.

"Past, present and future CO2 emissions will have a cumulative impact on both global warming and ocean acidification," he said, adding that "the laws of physics are non-negotiable".

Wendy Watson-Wright, who heads UNESCO's Intergovernmental Oceanographic Commission, praised the WMO for including ocean acidification in its annual report for the first time.

"If global warming is not a strong enough reason to cut CO2 emissions, ocean acidification should be, since its effects are already being felt and will increase for many decades to come," she said in the statement.

Monday's report also showed that methane, the second most important greenhouse gas, reached a new high of around 1,824 parts per billion last year.

With 60 percent of methane emissions attributed to human activities like cattle farming and landfills, hikes in such emissions has put concentrations of the gas in the atmosphere at 253 percent of the level prior to 1750, WMO said.

Nitrous Oxide, whose impact on the climate is nearly 300 times greater than CO2, meanwhile had an atmospheric concentration of 325.9 parts per billion last year, or 121 percent of pre-industrial levels, WMO said.