Ukrainian President Petro Poroshenko said Wednesday that Russia had withdrawn the bulk of its forces from his country and he pledged greater autonomy for the separatist east in moves that could help sustain a fragile truce. 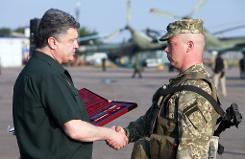 Soldiers walk at a checkpoint controlled by Ukrainian forces on September 10, 2014

The pro-Western leader's comments were soon followed by a European Union decision to extend by another day a heated debate on unleashing new sanctions aimed at punishing Russia over what the West says is Moscow's military aggression in the ex-Soviet state.

Poroshenko said Friday's ceasefire -- the first backed by both Kiev and Moscow since the conflict erupted five months ago -- had dramatically improved security in the country's war-ravaged industrial rustbelt.

"According to the latest information I received from our intelligence headquarters, 70 percent of Russia's forces have been removed," the presidency website quoted Poroshenko as telling a cabinet meeting.

"This gives us hope that there are good prospects for the peace initiative."

Moscow denies having deployed troops or weaponry across the border, and President Vladimir Putin dismissed the NATO claims as a reckless attempt to "revive" the Cold War-era security bloc.

Poroshenko -- elected in May on a promise to crush the rebellion and preserve Ukraine's unity -- also waded into explosive political territory by promising to submit a bill to parliament granting parts of the east temporary self-rule.

But he stressed this did not mean that the rebel-held territories were slipping away from Kiev's control.

"Ukraine will not make any concessions on issues of its territorial integrity," he said.

The Kremlin has long sought to turn Ukraine into a loose federation in which the largely Russian-speaking Donetsk and Lugansk regions establish their own trade and diplomatic relations with Moscow.

The number two in the separatist leadership of Donetsk said the vital industrial hub would seek outright independence in what promise to be arduous peace talks aimed at putting a durable end to a conflict that has frayed East-West ties.

"We are not considering remaining part of Ukraine," Andrei Purgin told AFP.

The truce was signed after five months of warfare that has killed more than 2,700 people and forced at least half a million from their homes.

Yet both sides have reported sporadic violations. Kiev said the lives of eight Ukrainian servicemen and one civilian had been lost since Friday.

And one pro-Russian gunman outside the airport of the main rebel stronghold Donetsk openly scoffed at the idea of a truce.

"Here's your ceasefire," Dmitry said while pointing to the tail of an exploded mortar round. "These little gifts arrived after the truce."

The truce was announced just as the tide had shifted strongly in the insurgents' favour on the eastern battlefields, prompting suggestions that Kiev had negotiated the deal from a position of weakness.

NATO said last month that Russia had funnelled in at least 1,000 elite troops and heavy weapons to support a rebel counter-surge that led to the quick surrender of hundreds of Ukrainian soldiers and dramatically reversed their earlier gains.

But Putin accused the US-led military bloc of making up the charges to support its decision to deploy a new force in eastern Europe and encroach on Russia's western frontier.

"The crisis in Ukraine, which was basically provoked and created by some of our Western partners, is now being used to revive this military bloc (NATO)," Putin was quoted as saying by Russia's state-run RIA Novosti news agency.

The EU decision to suspend debate until Thursday came after some members -- wary of further economic reprisals by Russia -- called for the measures to be imposed only on condition they could be scaled back quickly if the peace deal holds.

An EU diplomatic source said the bloc's 28 ambassadors agreed to "continue today's discussion on the restrictive measures, allowing for further assessment of the situation on the ground and additional consultations".

Sanctions were ratcheted up by Brussels and Washington after the July downing of a Malaysian jet over rebel-held territory that claimed 298 lives and raised concerns about Russia's alleged military support for the revolt.

A preliminary report by Dutch investigators Tuesday apportions no blame over the crash but appeared to back claims the plane was hit by a missile.

Kiev and the United States believe it was blown out of the sky by a Russian-supplied ground-to-air system.

Diplomats said the latest measures would restrict access to European capital markets for Russian state giants such as oil producer Rosneft and the tank maker Uralvagonzavod.

But Russian parliament speaker Sergei Naryshkin warned starkly: "As we have honestly warned our partners, the response will definitely come."