France and Britain won powerful positions Wednesday in the new European Commission led by Jean-Claude Juncker, who vowed to revive a stagnant economy, rebuild trust in Brussels and deal with threats on the EU's borders. 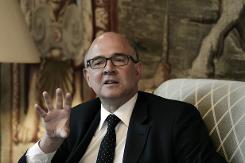 Former French Finance Minister and France’s representative on the next European Commission , Pierre Moscovici briefs Greek and foreign journalists at the French embassy in Athens on August 27, 2014 , after his talks with the Greek government

Former finance minister Pierre Moscovici overcame doubts about France's finances to be named economic affairs commissioner, one of the most coveted jobs in the new regime that will run the European Union for the next five years.

Britain, whose place in the EU is under threat from a surge in euroscepticism at home, surprisingly won the financial services post it wanted for its nominee Jonathan Hill, the former head of Britain's House of Lords.

But gains for older European powers was balanced by a posts for eastern member states in a new squad of so-called super commissioners who will oversee huge policy areas.

"I am convinced it will be a winning team," said former Luxembourg prime minister Juncker, who replaces Portugal's Jose Manuel Barroso.

"This commission has the expertise you need to tackle the economic and geostrategic challenges Europe is facing."

The 28-member team -- one for each EU country -- must be approved by the European Parliament before starting work in November.

As the EU's executive branch, the Commission drafts laws and polices national budgets for more than half a billion people across a bloc that is the world's biggest economy when taken together.

But it faces a raft of problems including a stalling economy, deflation and unemployment, plus the crisis in Ukraine on its eastern borders.

Germany's Guenther Oettinger was named as digital economy commissioner, Denmark's Margrethe Vestager is competition commissioner and Sweden's Cecilia Malmstroem gets trade, a job that involves fraught negotiations for a vast trade deal with the United States.

Spain's Miguel Arias Canete got the energy and climate post, a key job with the Ukraine crisis threatening gas supplies from Russia, but faces opposition from environmental groups over his role in two oil companies.

The powerful post of EU diplomatic chief went to Italian Foreign Minister Federica Mogherini at the end of August.

Juncker's new line-up, which includes four former prime ministers and several former finance ministers, is dominated by the European centre-right political group that he is a part of.

The announcement followed months of behind-the-scenes horse-trading in Brussels, with German-backed austerity hawks up against the likes of Paris and Rome, who want to ease EU rules on public spending to give greater leeway to boost economic growth.

The socialist Moscovici in particular overcame reservations from Berlin about France's ability to meet key EU budget rules, with his appointment coming on the day that France said it would miss its deficit targets by two years.

Moscovici told reporters in Brussels: "The rules, that's my job."

Hill's post meanwhile appeared to be an olive branch to Britain, which is set to hold a referendum in 2017 on its EU membership.

London wanted the post as its financial services industry is a key sector of the British economy, despite concerns from other members which want to see the City more tightly regulated.

But Juncker pointedly said Hill and Moscovici would in effect be overseen by two hawkish "super commissioners" -- Finland's Jyrki Katainen, who will cover jobs and growth, and Latvia's Valdis Dombrovskis, in charge of the euro.

Cracking jokes in a mixture of French, German and English -- with a dash of Luxembourgish and Bulgarian -- Juncker said a key task for his new team was winning back disillusioned voters who swung towards eurosceptic parties in European Parliament elections in May.

He said he had decided to "shake things up a bit" with his plans for the seven vice presidents who would work with the Commissioners to ensure policy was well coordinated and more easily understandable to EU citizens.

One of these, Dutch Foreign Minister Frans Timmermans, "will be my right hand man" as his first vice president, focusing on regulation.

Juncker added that it had been a "real challenge" to find the nine women candidates the European Parliament had demanded if it was to approve the new Commission.