VILKHIVKA (UKRAINE) - They spend much of their day clearing their gardens of shrapnel, digging up potatoes or chopping wood to prepare for the fast-approaching winter. 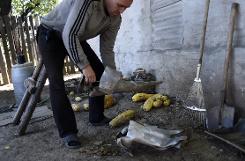 A resident of Vilkhivka, a village of miners near the front line between pro-Russian forces and the Ukrainian army some 50kms east of Donetsk, eastern Ukraine, moves a Grad multiple rocket shell out of his house, on September 18, 2014

The coal miners of the village of Vilkhivka in eastern Ukraine haven't been working for months, forced to down tools by the shells they say are still falling almost every day.

"As miners, we used to get coal for the stove," says Pavel Krivonosov, 64, who despite his age still used to work at the nearby state-owned Zhdanivka mine.

"Now the mine is shut, so we'll have nothing for the winter. And without electricity..." he trails off. "It can get down to minus 30, with the wind it's even worse."

He surveys the last crop of tomatoes, grapes and red peppers in his large vegetable garden, collecting mortar shrapnel and other fragments from various munitions into a grey metal bucket.

Vilkhivka, which lies about 50 kilometres (30 miles) from the main rebel stronghold of Donetsk, has been caught in the firing line as Ukrainian forces shell the pro-Russian separatists dug in nearby.

The village has been without water and electricity for more than a month. Half of its 600 inhabitants, those who could afford to, have left.

Those remaining are miners without jobs, without money.

"We haven't had any wages or anything for three months," chimes in Krivonosov's neighbour Oleksandr Gabrichuk, 40, his brow glistening with dirt-brown sweat.

"The pumps have been shut down, the mine is flooded. It'll take a year to get it started again," he says. "We're surviving on what we can get from the garden, that's all."

The fighting that has raged across eastern Ukraine since April has killed nearly 2,900 people and sent at least 600,000 fleeing devastated towns and cities.

Many of the once-powerful steelworks, coal mines and factories that form the backbone of Ukraine's heavy industry have ground to a halt and the country is now relying on a massive international aid package to stay afloat.

The IMF approved a $17 billion line of credit in April as part of a global $27 billion rescue but has warned even that might not be enough to shore up its finances.

Government figures show that national coal production -- which is concentrated in the eastern rustbelt known as Donbass -- plunged by half from January to August.

In May, the cabinet ordered the sale of dozens of state-owned coal mines, most of them loss-making ventures that benefited from government subsidies to keep running.

Ukrainian Prime Minister Arseniy Yatsenyuk said Wednesday the war in the rebel-held regions -- which together used to account for about a quarter of Ukraine's exports -- was costing six million dollars a day.

And he said the government planned to create a special fund to rebuild the hardest hit areas, seeking money from Ukrainian oligarchs and international donors as well as the state budget.

The European Bank for Reconstruction and Development this past week delivered a bleak outlook for Ukraine's economy, which was close to collapse even before the crisis erupted thanks to decades of autocratic misrule and corruption.

"The escalation of military turbulence in eastern Ukraine is weighing heavily on the economy and its external financing needs," it said in a report published Thursday.

The bank forecast the economy to shrink by a sharp nine percent this year "as a result of the disruption to production and trade, agricultural losses and a partial military mobilisation".

A smaller 3.0 percent decline is expected next year thanks to the help from the IMF and other donors and lenders, said the bank, which was founded in 1991 to help ex-Soviet bloc countries such Ukraine make the transition to free-market economies and democracy.

In Vilkhivka however, the residents have much more immediate concerns.

Explosions day and night sent clouds of smoke into the sky across the village, which lies among fields of sunflowers in the shadow of a giant slag heap.

"What are they shooting at? There are only civilians here," says Gabrichuk, pointing to his daughter, a blonde teenager in a tracksuit.

"We've finished pulling up the potatoes, bottling preserves, chopping the wood. But it'll never be enough for the entire winter," he says.

All he sees are the Ukrainian forces camped on the horizon a few kilometres east.

"If we give up our weapons we will all be killed. We don't believe them because so many times they've lied to their own people that there's no trust any more. It could have been solved in a peaceful way, without starting this war."

But he tries to reassure Gabrichuk.

"Don't worry, when the ceasefire is over, we'll retake Zhdanivka, repair the power plant and restore electricity."