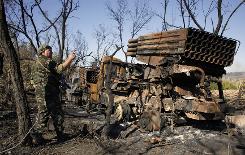 A Ukrainian serviceman on September 19, 2014 following the recent bombing of a camp near the village of Dmytryivka in the regionof Lugansk region

Government forces and pro-Kremlin militias were due by early Sunday to pull back their forces and set up a buffer zone along the frontline that splits a key industrial wedge of Ukraine's Russian-speaking east from the rest of the ex-Soviet state.

The withdrawal and an accompanying monitoring mission by teams from the OSCE pan-European security body are at the heart of a nine-point plan struck overnight in the Belarussian capital Minsk.

The deal is meant to put meat on the bones of a Kremlin-backed September 5 truce which Ukrainian President Petro Poroshenko unveiled in a bid to stem five months of clashes that have threatened his country's survival and claimed nearly 3,000 lives.

NATO General Philip Breedlove said continuing clashes have shown the two-week agreement to be a ceasefire "in name only" as he accused Russia of enmeshing soldiers among the guerrillas in order to split the westward-leaning neighbour in half.

The truce was "still there in name, but what is happening on the ground is quite a different story," Breedlove said on the sidelines of a meeting NATO symbolically convened in the ex-Soviet satellite state of Lithuania.

But he struck a more optimistic note when he added: "We heard today of some possible new agreements (in Minsk) and it is our sincere hope and desire that... the two combatants can come to agreement to again get to a ceasefire situation."

Saturday's Minsk memorandum -- signed by the warring parties and endorsed by both Moscow's Kiev ambassador and an OSCE envoy -- also requires the withdrawal of all "foreign armed groups" and mercenaries from the conflict zone.

The reference to hired guns and foreign soldiers marked a rare but indirect admission by Moscow that its fighters were manning the front lines alongside the increasingly well-armed and emboldened pro-Kremlin militias.

Russia insists that its troops were all either off-duty or vacationing soldiers who had slipped across the border based on their own convictions rather than direct orders from the Moscow military command.

But Breedlove insisted NATO intelligence showed that the Russian forces "are still inside Ukraine".

And even those who negotiated the peace plan's details for Kiev conceded that the entire deal required a great deal of good faith by two sides that have viewed each other as mortal foes for months.

Former Ukrainian president Leonid Kuchma -- representing Kiev throughout stuttering efforts to resolve the crisis -- said the entire arrangement would fall apart without the creation of a 30-kilometre (20-mile) buffer zone.

Territory under rebel control would be left open to their administration under a temporary self-rule plan adopted by lawmakers in Kiev on Tuesday.

Swiss president and OSCE chief Didier Burkhalter hailed the Minsk meeting as "a significant step towards making the ceasefire sustainable and an important contribution in the efforts to peacefully settle the crisis."

But the pact only came together after all sides agreed to leave the most divisive political issues concerning the rebel-held area's status for future negotiation.

It also overlooked unceasing flareups in violence that have claimed the lives of 35 Ukrainians soldiers and civilians in the 15 days since the original truce was declared.

A source in the Donetsk city government told AFP that a series of ground-shaking blasts that tore through a Soviet-era munitions plant on the outskirts of the main rebel stronghold early Saturday was set off by artillery fire whose source could not be traced.

The incident caused no casualties but saw a towering mushroom cloud rise over an entire section of the city at sunrise.

"When the first two explosions went off I woke up," said a 15-year-old schoolboy named Bogdan. "I could feel the wave of the impact, the vibrations in my body."

Rebel representatives in the city of nearly one million said they had also received a huge Russian humanitarian convoy overnight -- a type of shipment Kiev believes Moscow may be using to secretly supply the rebels with arms.

A top Ukrainian security spokesman said Moscow had blatantly "violated international law and our sovereignty" because it never gave Ukrainian customs officials a chance to inspect the cargo.

But there were still signs that the tenuous truce was making some progress on the ground.

An AFP reporter outside Donetsk saw the rebels hand over 34 Ukrainian government soldiers to government forces in exchange for 38 guerrillas. Dozens of war prisoners have been swapped on an almost daily in the past two weeks.

Saturday's Minsk agreement came at the end of a dizzying week for Poroshenko that included Ukraine's ratification of a landmark EU association agreement for which he personally lobbied, and a visit to Washington for talks with US President Barack Obama.

But the 48-year-old chocolate baron failed to convince Obama to provide Kiev with offensive weapons in the face of Russian "aggression".