IS fighters near Turkish border, despite US air strikes
World

IS fighters near Turkish border, despite US air strikes

MURSITPINAR (TURKEY) - Islamic State fighters were closing in Wednesday on a key Syrian town near the Turkish border, despite multiple US air strikes, as the Pentagon cautioned it "cannot bomb the militants into obscurity". 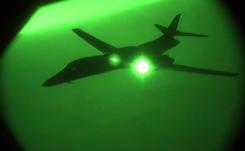 US Air Forces Central Command image shows a US Air Force B-1B Lancer prior to strike operations in Syria on September 27, 2014

US warplanes launched multiple strikes against Islamic State jihadists in both Syria and Iraq Tuesday, as Britain carried out its first air raids against the group.

IS fighters closing in on a key town near the Turkish border were among the targets of nearly a dozen US air raids in Syria, the Pentagon said.

US warplanes also bombed IS in neighbouring Iraq as Kurdish forces launched attacks on three fronts in a bid to recapture ground lost to the group last month.

Britain said its jets had destroyed an IS heavy weapons post and a machine gun-mounted vehicle in the country's first air strikes against the group in Iraq.

IS fighters have captured large parts of Iraq and Syria, declaring an Islamic "caliphate" and committing a wide range of atrocities.

The Pentagon, appealing for patience, warned that there would by no quick and easy end to the fighting.

No one should be lulled into a false sense of security by accurate air strikes," Pentagon spokesman, Rear Admiral John Kirby, told reporters.

"We will not, we cannot bomb them into obscurity."

A long-term effort will be needed to train and arm Syrian rebel forces and strengthen Iraq's army, he said.

He said "military action alone will not win this effort".

The US Marine Corps plans to deploy 2,300 troops to the Middle East for a new "special purpose marine air ground task force" designed to quickly respond to crises in the volatile region, Kirby added.

The idea for the task force originated before the US air strikes against the Islamic State group and is not related "to the ongoing operations in Iraq," he said.

IS fighters Tuesday freed more than 70 Kurdish school children it abducted in northern Syria in May, said the Syrian Observatory for Human Rights, a Britain-based monitor.

It was not immediately clear why IS released the children, part of a group of about 153 students snatched after taking school exams.

The move came as IS fighters penetrated within two to three kilometres (as close as 1.2 miles) of the Syrian town of Ain al-Arab on the Turkish border, the Observatory said.

It was the closest the militants had come to the town, known as Kobane in Kurdish, since they began an advance nearly two weeks ago, sending tens of thousands of mostly Kurdish refugees fleeing across the border.

NATO member Turkey, after months of caution in the fight against IS, has decided to harden its policy, and the government asked parliament Tuesday to authorise military action against IS in Iraq and Syria.

Lawmakers are due to debate a motion Thursday that Deputy Prime Minister Bulent Arinc said would "meet all the demands and eliminate the risks and threats".

Turkey has remained tight-lipped about what its intervention will entail, but Arinc indicated the parliamentary mandate will be kept as broad as possible to allow the government freedom to decide.

In Iraq, Kurdish peshmerga forces battled to claw back land from jihadists, as US warplanes launched 11 strikes at several locations, destroying armed vehicles and IS positions.

They struck at the border town of Rabia, north of jihadist-controlled Mosul, and south of oil hub Kirkuk, commanders said.

They also attacked the town of Zumar, near the reservoir of Iraq's largest dam, which has been a key battleground between Kurds and jihadists.

Peshmerga spokesman Halgord Hekmat said IS had been ousted from 30 positions.

Kurdish officials said at least six peshmerga and police were killed, as well as an unknown number of jihadists.

With the United States now conducting what it says are "near continuous" strikes in both Iraq and Syria, a Washington-based think-tank warned that the costs of the campaign could swiftly escalate.

US aircraft have flown more than 4,000 sorties since August, including surveillance flights, refuelling runs and bombing raids.

The Centre for Strategic and Budgetary Assessments estimated if attacks continue at a moderate level, the cost will run at between $200 million and $320 million a month, but if they are conducted at a higher pace the monthly cost could rise to as much as $570 million.

The UN says about 191,000 people have been killed since an uprising against Syrian President Bashar al-Assad erupted in 2011, escalating into a war that brought jihadists flocking to the country.

The number of Syrians in urgent need of food aid has shot up to more than six million, or more than one in four of the population, UN agencies said Tuesday.

Iranian woman died of 'blow to the head': family in Iraq