BRUSSELS - The eurozone's manufacturing sector reported lacklustre activity in September, set back by a fall in production by powerhouse Germany, a survey showed on Wednesday, adding to clouds over the single currency zone. 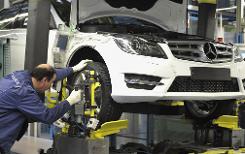 A worker at the Mercedes-Benz factory in Sindelfingen, southwestern Germany, on February 5, 2013. Manufacturing output has fallen in Eurozone powerhouse Germany

The latest survey of leading indicators from manufacturing industries in the eurozone, the purchasing managers' index (PMI), gave a reading of 50.3 points, down from 50.7 points in August and the lowest for 14 months.

The survey, by the Markit analysis group, is closely watched as a reliable indicator of future performance of manufacturing activity, and the new figures are likely to raise pressure on the European Central Bank to do more to avert deflation.

The bank holds a policy meeting on Thursday when it is expected to provide details of programmes already under way to inject cash into the eurozone economy.

The bank is not expected to announce any new measures, but analysts will watch in case it hints at any extra action to come.

The latest Markit data for manufacturing sentiment was a second estimate and worse than the first estimate of 50.5 points.

A reading of 50 marks the mid-line between signs of rising production or of decline, and the latest figures mean that the overall outlook has edged down in the month to almost stagnation level.

IHS Global Insight analyst Howard Archer said that there was little positive news in the latest manufacturing index and the outlook was worrying since order books had shrunk for the first time since June 2013.

At Berenberg bank in London, economist Christian Schulz commented: "A down revision of the German manufacturing PMI in September overshadowed signs of stabilisation elsewhere in eurozone manufacturing."

The index, having peaked at 54.0 in January, "now points to only modest growth," he said.

"Export-oriented manufacturers have suffered from the uncertainty caused by the crisis in eastern Ukraine and other geo-political risks, as well as the mixed performance in emerging markets and a slow recovery in the eurozone itself."

But now that the conflict in Ukraine had stabilised, and in view of a 10-percent fall of the euro against leading currencies since May, confidence in the eurozone could soon steady, he said.

When the ECB meets on Thursday it will also take account of new data on Tuesday showing exceptionally weak eurozone inflation.

Official EU data put eurozone inflation at 0.3 percent, perilously near a situation of falling prices which can cause businesses and households to delay purchases, further weakening activity and raising unemployment.

This adds to pressure for the ECB to take new action to inject cash into the economy to stimulate activity, lower the euro, and so push up prices.

The ECB's main duty is to ensure price stability, which it defines as inflation of just under 2.0 percent.