YANGON - A popular Myanmar news website was blocked Thursday by hackers angry at its description of hardline Buddhist monks as "radical", as the publication said it had received threats of violence over its coverage. 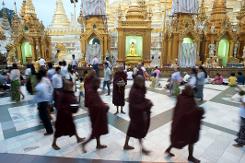 Buddhist monks take part in a ceremony at the Shwedagon pagoda on the full moon day of Kasone Festival to mark Buddha's birthday in Yangon on May 13, 2014. (AFP photo)

The Irrawaddy saw its main English-language website briefly replaced with a black screen and notice accusing it of being pro-Muslim and slamming a blog it ran in Burmese about Myanmar nationalist cleric Wirathu's weekend meeting with controversial Buddhist monks in Sri Lanka.

The Buddhist-majority countries have seen rising religious hate speech and attacks on minority Muslims, with some hardline monks accused of fanning intolerance by stoking fears of a threat from Islamic jihadists.

The hackers claimed the Irrawaddy "supports jihad and radical Muslims" and was "attacking Buddhism with so called freedom of speech".

Their notice, which was later taken down, appeared to come from Sri Lanka and demanded the publication apologise for referring to the country's hardline Bodu Bala Sena (BBS) or Buddhist Force as "radical".

It comes just days after staff in the publication's Rangoon office received a telephone threat of a fire and bomb attack over the same article, the Irrawaddy told AFP.

The news site, which operated for years during junta rule as an exile media group based in Thailand, now also has an office in Myanmar's main city.

Irrawaddy editor Aung Zaw described the cyber attack as "brutal", but said the website had largely been restored by Thursday lunchtime.

He said the Irrawaddy Facebook pages had been inundated with hate mail in recent days linked to coverage including the anniversary of Myanmar's junta crackdown on 2007 monk-led protests.

"It is very clear that a team is behind the cyber attacks and cyber abuse... Clearly, they are criminals," he told AFP.

Myanmar was gripped by harsh military rule for decades until a quasi-civilian regime took power in 2011, implementing reforms that have opened the country to the world and raised hopes of a transition to democracy.

But the country has also suffered several bouts of religious violence since 2012 that have left over 200 people dead and tens of thousands displaced, mainly Muslims.

The link between Wirathu and BBS has caused concern, with the Muslim Council of Sri Lanka warning the Myanmar monk's visit last Sunday posed "a serious threat to peace in our beloved motherland".

Sri Lanka suffered its worst religious violence in decades in June when riots broke out in the resorts of Aluthgama and Beruwala, leaving four people dead.

The BBS has been accused of instigating the attacks, a charge it denies.