KUALA LUMPUR - Malaysia has refused to grant a print license to a news portal often critical of the government despite a landmark court ruling in the site's favour, its editor said Thursday, in a case spotlighting the regime's curbs on press freedom. 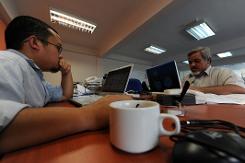 Journalists work on their stories at the Malaysiakini office in Kuala Lumpur on Nov 20, 2008. (AFP photo)

In a letter last week, the home ministry informed Malaysiakini.com it had rejected its application for a permit to publish a newspaper, as its news coverage "often causes controversy and is not neutral".

"Such news, if published in the print format, will cause shock and distress among the people" and "could cause hatred towards national leaders," said the letter seen by AFP.

The government -- dominated by a majority ethnic Malay party, which has controlled the multi-racial country since 1957 -- maintains a tight rein on traditional media, which are decidedly pro-government.

Websites such as Malaysiakini have over the past decade rapidly gained a following in the Internet-literate nation with reports on government malfeasance, abuses and persistent corruption, filling a growing demand for alternative news sources.

But the ruling United Malays National Organisation (UMNO) is implementing a broad clampdown on freedom of speech that has seen dozens of people, mostly opposition politicians or activists, targeted with sedition investigations or other charges.

Malaysian human rights group Suaram said at least 39 people have been investigated, charged or convicted under the British colonial-era Sedition Act this year alone, with new charges emerging on a near-daily basis recently.

Prime Minister Najib Razak in June launched a defamation suit against Malaysiakini over criticisms of his government on the site's reader comment pages.

Malaysiakini editor-in-chief Steven Gan said the portal would seek a court order to compel the home ministry to issue the permit.

"We want to make the point that we have a right to publish. We know it's going to be a long haul," Gan told AFP.

The legality of the ministry's move was not immediately clear. Ministry officials could not be reached.

Capitalising on growing yearnings for clean government and civil liberties, the opposition stunned UMNO by winning a majority of the popular vote in elections last year, though the regime clung to control of parliament.