BEIJING - A marigold and magenta mohawk adorning his shaven skull, Chinese punk rocker Shan Lin has a subversive message in a country that suppresses dissent -- a rebel with a cause. 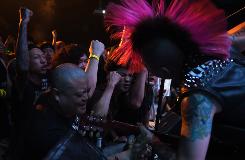 "The more anarchists the better, the more chaos and the more we love that! This country is so screwed up! There's a reason our band is called The Demonstrators," said the 30-year-old, before taking the stage at a punk festival in Beijing.

A T-shirt sold by the group SMZB set the tone for the event: the design showed one of the columns that line Tiananmen Square, the symbolic heart of Beijing and Chinese state power, emblazoned with the words "Chinese dream" -- President Xi Jinping's catchphrase -- and a pile of skulls at its base.

The crowd, a few hundred strong, made for an eclectic scene: brightly dyed hairstyles mixed with more conservatively dressed students in the heart of 798, an industrial estate converted into a trendy art district.

Bouncing up and down, they pogoed together in a smoky mosh pit as Shan's voice rose ever higher and he head-banged to a wall of screaming guitars.

It was a frenzied contrast to the sugary pop and bland rock that dominate China's musical landscape.

"Protest is the spirit of punk. We're talking about what we live every day," said Lei Jun, a chubby singer in his 30s whose head is shaved and his arms striped with tattoos.

One of the festival organisers, he wore a dark T-shirt emblazoned with a three-word English obscenity involving the police.

Sex Pistol posters hang above the till in Lei's little noodle restaurant in a narrow alley in old Beijing, but mainland China has a very different political system to Hong Kong, where major demonstrations have taken place in recent days. The country's punks know that they cannot be as openly outrageous as Sid Vicious.

Some sing in broken English to express their most anti-establishment views -- calls to fight the police "to the death" or tributes to the mothers of the students killed in the Tiananmen crackdown in 1989, while others use acronyms to disguise their denunciations of the Communist Party.

The Chinese punk bands may have copied the style of the original British punk scene, but their songs have distinctly local themes: "They come from forced evictions, unemployed youths killing themselves, the fact there is no future, an education system that turns young people into worker robots, the way money rules," said Lei Jun.

Punk first reached the country in the mid-1990s in Beijing and the central city of Wuhan after rock music -- the symbol of the student protests of 1989 -- was banned.

In the early days, several of the first bands in the capital called themselves the "Army of Boredom".

"Rock music was the music of hope and social and political demands that people believed would succeed. Punk music comes from a disenchanted youth, at the bottom of the social order and who feel powerless as people focus on wealth," explained Nathanel Amar, an expert on Chinese punk at the French international research centre CERI.

Twenty years later the themes have changed little, but there are still only an estimated 50-odd punk groups in China, and their audience is limited by censorship and lack of media access.

But Amar said their small crowds gave them a certain freedom.

"The authorities seem to have decided that looking to ban them would just raise their profile," he said.

In the event, the Beijing festival only had a brief visit from the authorities.

But there are other limits too. The vast majority of punk musicians have ordinary day jobs: Shan, of The Demonstrators, is a construction worker, and his guitarist smoothes down his hair when he goes back to work at an estate agency.

"It's hard to have a real punk way of life. We have to earn a living, and with the way the Chinese judge by appearances all the time, it's hard to maintain a punk look," lamented Lei Jun -- whose festival was sponsored by footwear brand Doc Martens.

Around 30 percent of the crowd were "committed fans who follow the punk ethic", he said, while "70 percent just come to hear the bands and to slum it a bit before going home: one-day or one-week punks".

But most of their fans "live in the margins", he said. "There are no second-generation rich kids in this room," he added, referring to the descendants of China's new wealthy elite.

Wang Yuxin, 24, discovered punk a year ago and it was a revelation: "The pressure at home was too strong for too long and it oppressed me.

"When I come to this kind of concert I feel free and unbound, I feel alive again," she said, wearing leather boots and her hair in spikes.

Even so, things change afterwards, she admitted.

"When I go back home, I become well-behaved again. I'm a very sensible little girl."