Mozambicans started voting Wednesday in a tough electoral test for the ruling Frelimo, the party that has run the resource-rich country since independence in 1975. 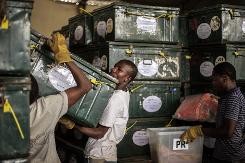 Mozambican Electoral Commission workers load election kits containing ballot boxes and voting material to be shipped out to the countryside on October 13, 2014 at a wharehouse in Maputo, Mozambique

Voters in neat lines started casting their ballots shortly after 7:00 am (0500 GMT) with Frelimo facing growing discontent amid an apparent popular swing towards the opposition.

At the Escola secundaria da Polana in the capital Maputo, two lines with around 80 people each formed outside the school hall being used as a polling station.

"Candidates have been promising us change, and that's what I want to see," said Eduardo, 28, an unemployed agriculture graduate who has been looking for a job for more than two years.

"Jobs, jobs. There are many graduates on the streets, some doing work that is unrelated to what they studied," he said.

Voter surveys cannot be published in Mozambique, but judging from the turnout at some campaign rallies, Frelimo could be in for a shock.

Its glitzy final rally in its southern fiefdom of Maputo failed to attract a capacity crowd.

Twenty-seven parties and two coalitions are competing for the favour of 10.9 million registered voters in the presidential race, plus polls for national and provincial assemblies.

Analysts say that while Frelimo is expected to win the election, the opposition is likely to make significant inroads, reducing the ruling party's overwhelming majority of 75 percent garnered in the last vote.

Opposition ballots are likely to be split between the former rebel Mozambican National Resistance (Renamo) and its breakaway Mozambique Democratic Movement (MDM).

The desire for change has been driven by a wealth gap that persists despite huge mineral resources, with fast economic growth sidestepping the bulk of a population that is among the world's poorest.

Renamo, which has lost all elections since the end of the country's 15-year civil war in 1992, has made a comeback, trying to spruce up its image after emerging from a low-level insurgency waged in the centre of the country just weeks ahead of the election.

"The recent (September 5) peace agreement is an opportunity for Renamo," said Nelson Alusala, a researcher with the Pretoria-based Institute of Security Studies.

"Mozambicans may be attracted to Renamo for the simple reason of wanting change," he said.

At the same time the fledgling MDM, led by the mayor of the second largest city of Beira, is gaining popularity.

Boats and helicopters were used to transport ballot boxes to remote areas of the vast country, where most people still live off subsistence farming.

If none of the three garners more than 50 percent of the vote, a run-off will be held within 30 days after official final results.

In the parliamentary race, Frelimo is seeking to defend its 191 seats in Mozambique's 250-seat assembly.

The government amended election laws earlier this year as part of peace negotiations with Renamo, which demanded that the opposition be given greater control over the electoral process in bid to improve transparency.

Parties have the right to nominate staff and observers at polling stations and have more members sitting on the electoral commission.