Kiev and the West have previously charged that Malaysia Airlines Flight MH17 was blown out of the sky in July by separatist fighters using a BUK surface-to-air system supplied by Russia, charges denied by Moscow. 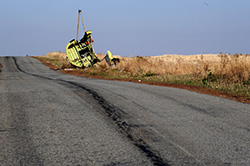 Wreckage of the Malaysia Airlines flight MH17 is seen on Oct 15 along a road near the village of Rassipnoe in Ukraine. flight MH17 was shot down on July 17 with 298 people on board. (AFP photo)

But the head of Germany's BND foreign spy agency Gerhard Schindler said intelligence indicated the rebels had captured a BUK system from a Ukrainian base and fired a missile that exploded directly next to the plane, Spiegel magazine reported Sunday.

The Amsterdam-Kuala Lumpur flight crashed on July 17 as it flew over rebel-held territory in eastern Ukraine, killing all 298 people on board, 153 of them Dutch.

Schindler said Russian claims the missile was fired by Ukrainian soldiers and that a Ukrainian fighter jet was flying close to the Malaysia Airlines plane were false, according to Monday's edition of Spiegel.

He also said Ukrainian photos had been "manipulated," the magazine reported but did not elaborate on what the pictures showed, who had provided them or altered them.

"These accusations against us are without any basis," he told Russia's Interfax news agency, adding that such missiles could "only be fired by well-trained experts."

American intelligence officials had in July said that the plane could have been shot down mistakenly by ill-trained separatists.

"The former miners who are today defending their country do not have the expertise to operate such a sophisticated system," he added.

An initial report by Dutch investigators issued last month found that the jet was hit by multiple "high-energy" objects but did not apportion blame.

The Russian-made BUK works by exploding directly outside the target and hitting it with a massive amount of high-velocity shrapnel.