NEW DELHI - When a Hindu woman tearfully claimed to national media recently she had been kidnapped, raped and forcibly converted to Islam, India's religious hardliners seized the chance to hike their "love jihad" fears. 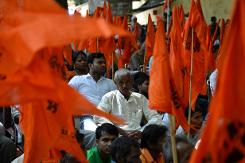 Indian United Hindu Front activists participate in a protest against the alleged 'Love Jihad' movement in New Delhi on September 23, 2014

Hardline Hindu activists, encouraged by the media attention, claimed scores of Muslim boys were attempting to abduct, seduce and elope with Hindu girls across the country for the sole purpose of conversion.

On websites and leaflets, right-wing groups warned India's Hindu majority of the "dangers", and a senior government minister called for talks between religious leaders "to find a solution to the issue".

Last week, the woman, from northern Uttar Pradesh state, sensationally retracted her claims, saying she had in fact been pressured by her family to concoct the story.

But hardliners remain adamant that Muslims, numbering about 150 million in India, have a secret strategy to turn the secular country of 1.25 billion into their own.

"Of course the girl is being forced to give false statements," Vinod Bansal, a spokesman for the radical Vishwa Hindu Parishad outfit, told AFP of the woman's retraction.

"Our police systems are so weak that women find it tough to open up on how they are being tortured by Muslim men," Bansal said, claiming he knew of at least 10 "love jihad" cases in New Delhi alone.

Hindu activists like Bansal have been emboldened since Prime Minister Narendra Modi's Hindu nationalist party stormed to power at elections in May after 10 years of rule by the centre-left Congress party.

Modi, who himself has deep roots in the Hindu grassroots Rashtriya Swayamsevak Sangh (RSS) organisation, has tried to allay fears among religious minorities of marginalisation under his right-wing administration.

And certainly moderate, mainstream Hindus dismiss "love jihad" as a ridiculous conspiracy theory. But experts warn efforts by hardliners to divide India along religious lines risk fuelling animosity between its many faiths.

"Some people are trying to polarise the country along communal lines," political and social commentator Paranjoy Guha Thakurta told AFP.

"It will be most unfortunate if those who are in power and their supporters allow it to happen (because) it is bound to inflame Hindu-Muslim tensions in the country," he said.

Police said the 20-year-old woman from Uttar Pradesh, the scene of deadly communal violence last year, had eloped with her Muslim lover.

With inter-faith relationships considered taboo in some parts of India, she had originally felt pressured in August to claim rape and conversion.

Local politicians seized on the false claims during state by-elections last month in a bid to polarise voters along communal lines, before she finally reversed her story.

"She said she was being threatened by her own family (into making the false claims)," said Onkar Singh, police superintendent of Meerut city.

The term "love jihad" first gained traction in India in 2009 when Hindu extremist Janajagruti Samiti claimed some 30,000 women in southern Karnataka state had been converted to Islam.

Sites and paraphernalia devoted to the issue claim militant groups are waging "love jihad" worldwide and blame the "fake secularism" of India's mainstream media for encouraging it.

Young Muslim men "are trained in camps" before being sent to seduce Hindu women, have a Muslim child and gradually finish off Hinduism "once and for all", one document says.

The RSS, whose legions of volunteers mobilised to help Modi win the election and has since grown in prominence, has said it will continue to push authorities to stop the alleged conversions from happening.

RSS founders say India's non-Hindus must adopt Hindu culture and religion -- "they must cease to be foreigners, or may stay in the country, wholly subordinated to the Hindu nation".

Water Resources Minister Uma Bharti, a veteran of the ruling Bharatiya Janata Party, has said communities should hold talks on "love jihad" so they are "not jeopardised in any way".

But Modi, who was chief minister of Gujarat state when deadly anti-Muslim riots erupted in 2002, has urged an end to communal tensions and violence, while another minister defused the current issue by saying he didn't understand what the term meant.

"When Kareena and I married, there were similar death threats, with people on the Net saying ridiculous things about love jihad," he wrote in the Indian Express this month.

"Marriage is not jihad. Intermarriage is India. India is a mix."

Deputy Prime Minister Prawit Wongsuwon has ordered all relevant state agencies to prepare for major downpours across 22 provinces which may trigger flash floods and landslides.

Covid-19 patients who have undergone antigen tests while in community isolation venues can seek medical treatment under the kingdom's healthcare system.

WASHINGTON - US pop star Pink has offered to pay a "sexist" fine levied on Norway's women's beach handball team after they refused to wear bikini bottoms during a game in the Euro 2021 tournament.