Why are marauding, evil clowns wreaking havoc in France?
World

Why are marauding, evil clowns wreaking havoc in France?

PARIS - Evil, armed clowns sow terror as part of an eerie trend that spreads from city to city: while this may sound like Hollywood's latest horror blockbuster, it's real and happening in France. 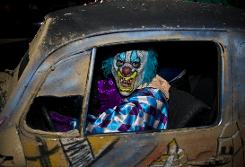 Police have jailed or arrested more than a dozen teenagers across the country in recent weeks after they dressed up as the pranksters and wreaked havoc on the streets, at times armed with pistols, knives or baseball bats, sometimes beating people up.

The phenomenon in France has even prompted anti-clown vigilantism, forcing police to step in to try and quell growing hysteria.

But why clowns? And could the approach of Halloween have something to do with it?

From Batman's Joker to Stephen King's child-killer in "It" or Twisty the Clown in US series "American Horror Story," the colourful buffoon who is supposed to make children laugh has often morphed into pure evil in films or books.

"For 30 years now, the malevolent clown is a character that has been exploited by popular culture with films, books that have gradually built up a theme... that everyone knows," said anthropologist Veronique Campion-Vincent, an expert on rumour.

"Urban legends are based on the idea that we are in a world where things are not what they seem.

"That's the case for this apparently amusing being who makes children laugh, but who is actually really nasty. The clown could even be seen as a victim, someone who is awkward, who takes his revenge."

Whether these fictional characters have been inspired by or contributed to coulrophobia -- a fear of clowns -- remains to be seen.

While little is understood about the cause of this phobia, it is thought to result from not knowing what lies behind the excessive make-up, red nose and hair colour.

Like many other fears such as arachnophobia, authors and filmmakers have been inspired by coulrophobia for their books or movies.

And it's not just fiction that has fuelled a fear of clowns.

US serial killer and rapist John Wayne Gacy, who was executed in 1994 for torturing and murdering 33 people, became known as the "Killer Clown" as he would dress up as the prankster for children's parties.

In France, where Halloween never used to be celebrated but is gradually becoming more popular, the phenomenon of terror-inducing clowns appeared earlier this month in the north.

According to police, people increasingly reported spotting clowns "outside schools, but also on public roads, in bushes, in a square."

"Their targets are often young children or teenagers, but also adults," a police source in northern France told AFP.

Last week, a 19-year-old got a six-month suspended jail term for threatening passers-by while dressed as a clown in the town of Bethune.

And the phenomenon has spread across the country.

Police on Saturday night arrested 14 teenagers dressed as clowns and carrying weapons in the Mediterranean port town of Agde.

Not far away in Montpellier, a fake clown chased a man down a street and beat him with an iron bar, prompting a court to jail him for four months.

The man admitted Monday that he had been drunk and just wanted to scare a passer-by, as is the fashion on YouTube where prank videos involving fake clowns are multiplying.

One such video that sees a man dressed as a clown pretend to club people to death in front of terrified passers-by has had almost 30 million hits.

- Spiralling out of control? -

"Some delinquents took advantage of it this weekend. But while it is not insignificant, it's still quite limited.

"It's part of these short-term fads that live on as long as media talk about them."

But according to Aurore Van de Winkel, a Belgian researcher into urban myths, this age-old phenomenon of horrific stories being circulated as true "is being created under our very eyes."

She said that apart from the YouTube videos, the pre-Halloween period is traditionally conducive to the creation of urban legends, which could explain the proliferation of these aggressive clowns.

Campion-Vincent warned there was a risk that this "game" would spiral out of control, particularly if real-life and the imaginary worlds merge into one.

She cited the example of two 12-year-old girls who stabbed their friend almost to death this year in the United States to please "Slender Man," a fictional villain that originated as an Internet meme.