A Pakistani policeman used an axe to kill a man arrested on blasphemy allegations, a day after a mob murdered a Christian couple accused of the same crime, officials said Thursday. 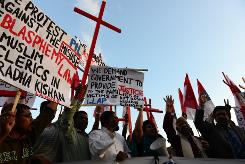 Pakistani Christians shout slogans in protest against the killing of Christian couple, during a rally in Islamabad, on November 5, 2014

Tufail Haider, a 50-year-old from the minority Shiite sect of Islam, was arrested for allegedly making derogatory remarks about the companions of the Prophet Mohammed and brought to the Civil Lines police station in the eastern city of Gujrat on Wednesday.

It was the second vigilante killing over blasphemy in Punjab province in two days, after a husband and wife were lynched and their bodies burned in a case that sparked widespread horror.

"Tufail was kept in the lock-up but he continued uttering derogatory remarks and hurled abuse at policemen. He looked like a malang (wandering preacher) and seemed mentally imbalanced," duty officer Ali Raza told AFP.

"Assistant Sub-Inspector Faraz Naveed, 36, became very angry on hearing the derogatory remarks against the companions of the prophet and he killed the detainee with an axe in the lock-up."

Naveed has been arrested and legal proceedings have been started against him, he added.

District Police Chief Rai Mohammad Ejaz confirmed the incident and said Naveed had brought Haider into his own room and locked the door before killing him.

Sectarian violence has been on the rise in Pakistan, with mainly Sunni extremists targeting the country's minority Shiite community.

Around 1,000 Shiites have been killed in the past two years, a heavy toll on the community that makes up roughly 20 percent of the country's 180 million population, most of whom are Muslim.

There has been a recent surge in extra-judicial killings linked to Pakistan's draconian blasphemy laws, which were put in place during the period of British rule and strengthened by military ruler General Zia-ul-Haq in the 1980s.

A furious crowd murdered a Christian bonded labourer and his pregnant wife on Tuesday for supposedly desecrating pages of the Koran in a village in Punjab, prompting condemnation, including from Prime Minister Nawaz Sharif and the country's top religious body.

Punjab Chief Minister Shahbaz Sharif described the couple's murder as "the worst brutality" and pledged to bring justice for their three children.

On Thursday, the head of a leading body of Islamic clerics pledged to monitor the case closely to ensure the perpetrators were punished.

Cleric Tahir Ashrafi, head of the Pakistan Ulema Council, said he would set up a commission to follow developments.

"Nobody has the right to hurl an allegation, set up his own court and punish someone in the most gruesome way," he said.

"Those who have committed this heinous crime have neither served Islam nor Pakistan."

Pakistan is a deeply religious country and blasphemy an extremely sensitive subject, with even unproven allegations sometimes triggering mob violence.

Rather than being punished, those who kill people accused of defaming Islam are often hailed as heroes.

The axe killing echoes the September prison shooting of an elderly British man with severe mental illness, who was sentenced to death for blasphemy in January.

An internal investigation found that the guard who shot the man had been radicalised and goaded into the attack by Mumtaz Qadri, a police bodyguard who murdered the Punjab governor in 2011 for suggesting reform of the blasphemy laws.

As poverty bites, Lebanese give up their pets