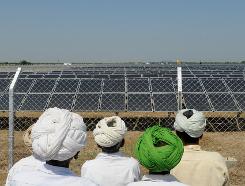 The inauguration of a solar farm in Gunthawada village, Banaskantha district, in India's Gujarat state on October 14, 2011

Out of over 30 countries at the meeting, 21 made pledges that added up to "the largest amount the international community has ever mobilised for a dedicated climate finance mechanism," said the fund.

Money from the fund will be used as grants or loans to help poor countries finance projects such as solar and wind farms, planting trees or disaster-proofing infrastructure.

Hela Cheikhrouhou, the fund's executive director, said the money would be spent equally on climate change adaptation and reducing emissions, much of it for vulnerable small island nations and Africa's poorest countries.

She said raising the billions in pledges had created "renewed trust and enthusiasm" ahead of international talks in Peru next month, and in France a year later, on slashing worldwide carbon emissions.

The United States had already pledged $3 billion and Japan $1.5 billion. Germany and France have promised $1 billion each, Britain more than $1.1 billion and Sweden over $500 million.

Other countries that have made pledges include the Czech Republic, Denmark, Finland, Italy, Luxembourg, Mexico, the Netherlands, New Zealand, Norway, South Korea and Switzerland.

UN chief Ban Ki-moon said the pledges "demonstrate that governments increasingly understand both the benefits derived from climate action and the growing risks of delay. It also provides much needed public finance which is key to unlocking investments at a much larger scale from private sources."

But aid agency Oxfam called the total amount "a bare minimum" compared to the $10-15 billion it and developing countries had called for and said Australia, Austria, Belgium, Canada and Ireland had not yet made any pledge.

"Financial support from developed countries should be a building block for a global climate agreement, not a stumbling block," said the group's Alison Woodhead.

"Many developed countries have stepped up to give the Green Climate Fund a chance to get on its feet, but more is needed for it to succeed."

British economist and climate change expert Nicholas Stern welcomed the contributions and said "overseas aid for developing countries to make the transition to low-carbon economic development and growth helps to reduce poverty and to secure a cleaner and safer future for everyone".

The fund is seen as a first step toward a far more ambitious goal set at the Copenhagen climate summit five years ago -- for the world to "mobilise" $100 billion a year for broader climate finance by 2020.

UN climate experts have cautioned there is no time to lose in the battle against global warming, which Ban Ki-moon last week labelled "the defining issue of our times".

The UN Intergovernmental Panel on Climate Change warned this month that time is running out to limit warming to two degrees Celsius (3.6 degrees Fahrenheit) by 2100 from pre-industrial levels.

Instead, they said the Earth is on a trajectory to warm up by at least four degrees Celsius -- a recipe for melting ice caps, extreme weather events, habitat and species loss and conflict for resources.

After years that saw little progress in climate talks, the world's two biggest economies and top polluters, China and the United States, this month agreed to new targets.

At a Beijing meeting, President Barack Obama committed the United States to reducing its greenhouse gas emissions by 26-28 percent by 2025 compared to two decades earlier.

China, the world's top polluter, agreed for the first time to slow emissions growth and ultimately reverse it after emissions peak "around 2030".

The 28-nation European Union, the third-largest greenhouse gas producer, has pledged to cut its emissions by at least 40 percent by 2030 from 1990 levels.