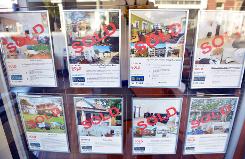 A window at a real estate agent shows sold properties in Sydney on August 5, 2014

The committee's review was commissioned this year amid concerns that local buyers were being squeezed out of the residential property market by foreign investors, particularly cashed-up Chinese.

"We have found that the framework itself is appropriate and strikes the right balance in terms of encouraging beneficial foreign investment in the housing market, however its application is severely lacking," committee chair Kelly O'Dwyer said in a statement.

"I regard the current internal processes at the Treasury and FIRB (Foreign Investment Review Board) as a systems failure."

Chinese investment is a sensitive issue in Australia where rural politicians have argued against selling valuable farm and mineral land to foreigners, and there are signs of an influx in Chinese housing investors.

Investment bank Credit Suisse this year estimated that Chinese investors could pour Aus$40 billion (US$36 billion) into Australian residential property over the next seven years, pushing up prices in what is already one of the world's most expensive housing markets.

The review found there were serious gaps in the enforcement of foreign investment rules, including "virtually non-existent" sanctions, no prosecutions, and inadequate data on purchases.

"Australians must have confidence that the rules, including those that apply to existing homes, are being enforced. Our inquiry revealed, that as it stands today, they could not have that confidence," O'Dwyer said.

The committee tabled 12 recommendations to shore up the current framework, including removing barriers for adequate auditing and new penalties for breaching the rules.

While foreign buyers are mostly limited to purchasing new housing, temporary residents can buy one existing property but they are supposed to sell it when they leave the country.

The report recommended migration laws be amended so the immigration department informs the FIRB when temporary residents depart, and that a national register recording the citizenship and residency status of all housing buyers be set up.