KUALA LUMPUR - The Thai and Malaysian premiers agreed Monday that stalled talks on ending southern Thailand's deadly Muslim insurrection could only resume once all rebel attacks cease and its various insurgent groups come to the table as one. 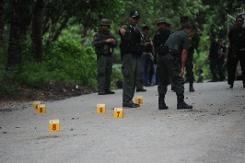 Members of a Thai bomb squad unit inspect the scene after a roadside bomb blast in Rueso district of Narathiwat on Nov 15.

The conditions spelled out by Malaysian Prime Minister Najib Razak, agreed in a meeting with hardline new Thai leader Prayut Chan-O-Cha, appeared to cast doubt on any speedy resumption of the peace talks on the bitter and stubborn conflict.

Prayut arrived in Malaysia on Monday for a one-day visit, his first to Thailand's Muslim-majority southern neighbour since the former military chief seized power in a May coup, with officials saying the stalled peace talks were "high on the agenda".

"All parties need to respect the law and the Thailand Prime Minister has agreed that the army could reduce its presence," Najib said.

But a decade-long insurgency that has seen near-daily bombings, shootings and occasional beheadings has spiked anew this year -- sparking a renewed Thai security crackdown, with no end in sight.

More than 6,100 lives -- most civilians -- have been lost in the rebellion, where a range of shadowy groups are fighting for a level of autonomy from the Thai state.

Malaysia hosted several rounds of peace talks last year between one of the Muslim rebel groups and the previous Thai government led by Yingluck Shinawatra.

But the dialogue made little headway and eventually collapsed as Yingluck's government became engulfed by a political crisis that ultimately led to Prayut's coup.

Najib said all rebel groups must agree together on their demands and "only then can substantial negotiations start."

Experts on the conflict have said the peace effort is hampered by divisions within insurgent groups.

Attacks continued during last year's talks, raising doubts over whether the rebels at the table spoke for other factions or had any authority over fighters on the ground.

Buddhist Thailand colonised its predominantly Muslim deep south more than a century ago, and insurgencies have repeatedly flared.

Despite seeking a resumption of peace talks, Thai authorities have recently distributed hundreds of assault rifles to villagers, saying locals need to be able to protect themselves following a slew of insurgent attacks on civilians.

But rights groups have warned the move threatens to breed yet more fear and violence.

Dozens of Malaysian demonstrators held a protest outside Thailand's embassy in Kuala Lumpur on Monday against Prayut's visit, denouncing him for his "illegal" power grab.