Ukraine handed foreigners -- including a US citizen -- top posts in a new reformist government on Tuesday aimed at rooting out endemic corruption amid a new push for a general ceasefire in the separatist east. 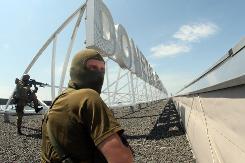 Pro-Russian militants take position on the roof of the international airport of the eastern Ukrainian city of Donetsk on May 26, 2014

President Petro Poroshenko told a marathon parliament hearing that Ukraine had to learn from "foreign experience" as it tries to climb out of bankruptcy that many blame on decades of political gridlock and graft.

He then signed decrees awarding Ukrainian citizenship to US national Natalie Jaresko -- the head of a private equity fund whom parliament confirmed as finance minister -- and Lithuanian investment banker and new economy chief Aivaras Abromavicius.

Foreign Minister Pavlo Klimkin and Defence Minister Stepan Poltorak kept their posts on a day that saw a local truce agreed at Donetsk airport -- the focal point of a war that has claimed more than 4,300 lives -- and a broader ceasefire "agreed in principle" for the other rebel province of Lugansk.

After past accusations of US meddling in Ukrainian politics, State Department deputy spokeswoman Marie Harf denied that Washington had any hand in the choice of an American as finance minister.

"This is a choice for the Ukrainian people and their elected representatives. This is their decision," Harf told reporters. "I don't think we had anything to do it with at all."

"We strongly condemn Russia's continued and deliberate destabilisation of eastern Ukraine in breach of international law," NATO foreign ministers said after their meeting in Brussels.

Russia had earlier said NATO was "trying to destabilise the world's most stable region" by sending extra defences into countries such as the three tiny Baltic states.

Analysts linked Ukraine's decision to put foreigners in charge of some of the country's most sensitive ministries to counter growing public mistrust in the current crop of politicians -- a group infamous for getting into fights in parliament and speeding around town in luxury cars.

The passions of the pro-European revolt that threw out a Russian-backed president in February were sparked in part by the levels of corruption in the offices of local and federal bureaucrats in all corners of Ukraine.

"We are placing our bets on these people with the hope that foreigners will not get mixed up in corruption," said political analyst Taras Berezovets.

Ukraine is following in the footsteps former Soviet nations such as Georgia -- another pro-Western state that once had a French national as foreign minister.

The American Jaresko is an ethnic Ukrainian who co-founded Horizon Capital -- an investment fund focused on eastern European nations such as Russia and Ukraine.

"I grew up in a Ukrainian family in the United States, but have been working and living in Ukraine for more than 20 years," Jaresko told Poroshenko after accepting Ukrainian citizenship.

She went to Harvard University's Kennedy School of Government and took an active part in last winter's pro-European protests in Kiev.

The government took shape as top Russian and Ukrainian generals continued negotiations over the terms of a general truce that could replace a September 5 peace accord that has been breached on hundreds of occasions.

Deadly fighting in recent weeks intensified both around Donetsk and along Ukraine's porous southeastern border -- a frontier now under the control of the rebels and what NATO believes are hundreds of Kremlin troops.

A truce signed by the insurgents and the government over the weekend is due to go into effect on Friday across Lugansk -- one of east Ukraine's two self-proclaimed "people's republics" that pledge allegiance to Moscow.

Russian and Ukrainian generals also agreed a truce with the rebels for the territory surrounding the disputed and completely devastated international airport on the northern outskirts of Donetsk.