PARIS - Companies and lovers of the City of Lights snapped up 6,600 ".paris" Internet domain names in a mere two hours on Tuesday, far exceeding expectations. 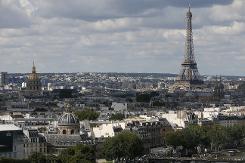 Paris is the first French city endowed with its own internet extension, and will receive 40-60 percent of the revenue from those buying it

Deputy Paris Mayor Jean-Louis Missika said the city had a target of selling 10,000 of the domain extensions over the next two years, but now it appears that goal will be largely surpassed.

The cost of having a .paris at the end of one's website address starts at 39 euros ($48) for one year, with the city getting 40-60 percent of the revenue.

The domain name allows businesses to associate themselves with a "prestigious brand: Paris", said Missika.

The .paris name isn't just about vanity, though it could be a tool for firms to get a leg up on competitors with more geolocation being used on mobile devices.

Over 1,500 .paris domain names were pre-reserved starting in September, adding to the 100 "ambassadors" like the Eiffel Tower and Paris's transit and airport authorities that had been using the extension since June.

Paris is the first French city endowed with its own internet extension, which leaders hope will allow some measure of control over its online namesake.

"Once domains open up in a city's name, Paris, like New York, London or Berlin, must have command of its digital territory," Missika was quoted as saying in French paper Metronews.

The French capital is not itself selling the domain names, rather an accredited domain name registry is handling the process.