PARIS - Anthropologists on Wednesday said they had found the earliest engraving in human history on a fossilised mollusc shell some 500,000 years old, unearthed in colonial-era Indonesia. 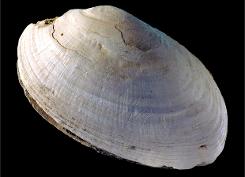 This handout picture released by the journal Nature on December 3, 2014 shows the fossil Pseudodon shell with the engraving made by Homo erectus from Trinil, Indonesia

The zigzag scratching, together with evidence that these shells were used as a tool, should prompt a rethink about the mysterious early human called Homo erectus, they said.

The discovery comes through new scrutiny of 166 freshwater mussel shells found at Trinil, on the banks of the Bengawan Solo river in East Java, where one of the most sensational finds in fossil-hunting was made.

It was here in 1891 that an adventurous Dutch palaeontologist, Eugene Dubois, found "Java Man."

With a couple of army sergeants and convict labour to do the digging, Dubois excavated part of a heavy-browed skull, a tooth and a thigh bone.

He interpreted these as being the remains of a gibbon-like hominid that was the long-sought "missing link" between apes and humans.

Dubois' claim excited fierce controversy, as well as jokey images of our distant ancestors as slack-jawed primates with dragging knuckles.

Palaeontologists eventually categorised the find as a Homo erectus, or "upright human" -- a hominid that according to sketchy and hugely debated fossil evidence lived from around 1.9 million years ago to about 150,000 years ago.

Reporting in the science journal Nature, a team led by Josephine Joordens at Leiden University in the Netherlands, harnessed 21st-century technology to take a new look at the Trinil shells, now housed in a local collection.

A third of the shells were also found to have a curious hole at the base of one of the bivalve's muscles.

Sharp-toothed animals such as otters, rats or monkeys may have bitten into it to get at the flesh -- but a likelier source, said the experts, is H. erectus, which tucked into the shells for food.

The team carried out experiments on living mussels of the same mollusc family, Pseudodon, piercing the shell at the same location with a pointed object.

As soon as the shell was broached, the muscle was damaged by the tool tip and the mollusc could be easily opened without breakage.

The scientists then deployed a scanning electron microscope to get a closer look at the shells.

One of them was found to have a polished and smooth edge, suggesting it may have been used as a tool to cut or scrape.

Another had a zigzag set of grooves incised into it, by a sharp implement such as a shark's tooth.

The marks are at least 300,000 years older than the earliest previously known, indisputable engravings.

"The simple zigzag on the shell is the earliest engraving known thus far in the history of humankind," Joordens' colleague, Wil Roebroeks, told AFP in an email.

"But: we have no clue why somebody made it half a million years ago, and we explicitly refrain from speculating on it" in terms of art or symbolism, he said.

"The behaviour is deliberate. The individual had the desire to make a zigzag pattern in a single go," he said.

But d'Errico cautioned, "We don't know why he did it. It may have been a mark of ownership, a personal code, a gift."

Geometric marks are considered to be a sign of cognitive behaviour and neuromotor skills that -- until now -- have been overwhelmingly attributed to modern man, Homo sapiens.

Put together, the new evidence delivers a blow to the stereotype of H. erectus as lumbering, heavy-handed and stupid.

He was smart enough to feed himself efficiently from mussels, dextrous enough to use slim, smooth shells as tools and brainy enough to engrave an abstract pattern on one of them.

A "richer" image of this enigmatic hominid results, Roebroeks said.

"We knew that H. erectus made nice handaxes etcetera," he said.

"Now we have this evidence for sophisticated opening of shells and a small zigzag, it might create a more subtle picture."