MANILA - Torture of suspected criminals by police in the Philippines has thrived under the administration of President Benigno Aquino, human rights monitor Amnesty International said Thursday. 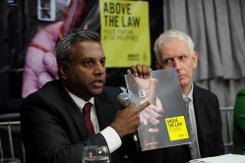 Dozens of beatings, rapes and electrocutions are being recorded by the country's human rights commission every year, with many other cases going unreported, Amnesty secretary general Salil Shetty told reporters.

"Torture by the police is very widespread and routine," Shetty said.

Shetty said ending torture could be a "very important legacy" for Aquino, whose six-year term will end in 2016, but he accused the president of not doing enough to reform the police force.

"If you don't acknowledge the problem, there can be no solution," Shetty said.

Quoting data from the Philippine human rights commission, Amnesty said 457 torture cases were reported from 2001 to the middle of this year. The 75 cases recorded in 2013 was the highest in a single year.

But, five years after the Philippines passed landmark anti-torture legislation under previous president Gloria Arroyo, there have been no convictions, Shetty said.

"The single, most important reason why there is torture in the Philippines is they (police) get away with it," he said.

He said low salaries also contributed to the problem, with police officers torturing to extract confessions or extort money.

Amnesty recommended establishing a body that is independent from the police to handle reports of torture, as the current system sees police investigating themselves.

Shetty said Aquino and the heads of the national police force and interior ministry did not respond to Amnesty's requests for a dialogue to discuss their report.

"Looking the other way will not help," he said.

Asked to comment on Amnesty's findings, Aquino's spokesman, Herminio Coloma, said: "The government is pursuing its efforts to prosecute those violating the anti-torture law".

The national police issued a statement contradicting Amnesty's findings and insisting major reforms on human rights had been successfully implemented.

In the statement, police spokesman Chief Superintendent Wilben Mayor said unspecified "disciplinary action" had been taken against some police officers who committed torture.

He did not address Amnesty's complaint about no criminal convictions.

Philippine security forces gained notoriety for torture and other human rights violations during the two-decade reign of dictator Ferdinand Marcos, which ended with a "People Power" revolution in 1986.

Corruption and human rights abuses within the police and military have proved to be an enduring problem.

On Thursday, the nation's ombudsman recommended that the national police chief, a close ally of Aquino's, be suspended for six months over graft allegations.

The case against director-general Alan Purisima stemmed from allegations he and 11 other police officers siphoned funds related to firearms licenses in 2013 and 2014, the ombudsman said in a statement.

The suspension will take place once the interior department, which supervises the police, receives the order, Aquino's spokesman Herminio Coloma told reporters.

The ombudsman is also investigating other, unrelated corruption allegations against Purisima, whose assets -- including four houses, a condominium and a luxury four-wheel drive vehicle -- have come under scrutiny.

The police chief has been under fire in recent months after admitting to accepting gifts and favours worth hundreds of thousands of dollars from builders.

Purisima, who makes $2,380 a month, has rejected the corruption allegations.