WELLINGTON - A New Zealand man who faces the death penalty if convicted of drugs charges in Indonesia appears to be the victim of an online dating scam, according to his family Saturday. 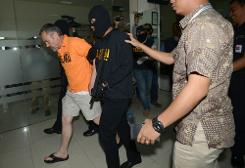 Antony Glen De Malmanche of New Zealand is escorted by security for a press conference at the customs office in Denpasar on Bali island, Indonesia, Dec 5, 2014.

Antony de Malmanche, 52, was arrested at Bali airport this week when he arrived on a flight from Hong Kong with 1.7 kilograms (3.7 pounds) of methamphetamine hidden in his backpack.

Methamphetamine is in the most serious drug class in Indonesia which has some of the stiffest penalties for trafficking in the world. Airport customs chief Budi Harjanto said de Malmanche could face the death penalty if convicted.

However, the New Zealand media have portrayed de Malmanche as a simple man, unemployed and unable to do physical work after being seriously injured 12 years ago, and who was duped while looking for love online.

His son Ashley told reporters that de Malmanche was heading to Bali to see a woman he met on an Internet dating site and she made all his travel arrangements.

"She lives in South Africa or somewhere. She said she would pay for his trip. I said to him 'look, this is dodgy, people don't just do that kind of thing. There is no such thing as a free lunch'. But he went."

He said the woman had paid for his father's clothes, passport and air tickets.

A cousin, Carl de Malmanche, said Antony would not listen to warnings about the woman.

"Sounds like she was looking for an idiot and she has found a gullible one and showed him a good time."

Harjanto said de Malmanche had flown to Bali from Hong Kong to get married with "his fiancee, travelling separately" on a different flight.