MOSCOW - Prime Minister Dmitry Medvedev urged Russians to be patient Wednesday as the ruble plunged further due to falling oil prices and Western sanctions over Ukraine, and said the currency was now undervalued. 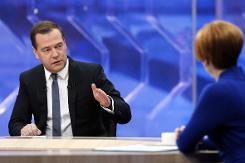 Dmitry Medvedev, pictured during a live interview at the Ostankino television center on December 10, 2014, says he keeps his own money in rubles despite the currency's plunge

"It's definitely not necessary to go into hysterics," Medvedev said in an annual televised interview.

"Here, people just need to have patience and look at how events developed in a similar situation in 2008-2009 when the ruble weakened significantly," he told five television channels.

"Most economists and analysts agree that at the moment the ruble is excessively weakened, that is, it is undervalued," said Medvedev, who served a four-year stint as president from 2008 before ceding the Kremlin back to his mentor Vladimir Putin in 2012.

He warned that Russians could ultimately lose if they converted their savings into foreign currency.

The dollar is now up some 65 percent against the ruble since the start of the year.

The Russian currency is also at a level of 67 rubles against the euro, down from 45 rubles at the start of the year.

On Wednesday, the ruble hit a new record low of over 68 to the euro in late afternoon trading.

This year, falling growth has been exacerbated by the impact of Western sanctions on Russia over Ukraine and falling oil prices.

Authorities have repeatedly intervened but have so far been unable to halt the collapse of the ruble.

The World Bank on Tuesday announced a gloomier economic forecast for Russia, predicting its economy would shrink by 0.7 percent in 2015.

Medvedev said that during the 2008-09 crisis when the ruble last fell dramatically against the dollar and euro, those who exchanged savings ended up losing money as the currency subsequently strengthened.

He added that he kept his own money in rubles.

Nevertheless, the prime minister conceded that ordinary Russians were suffering from rising prices and that while a weak ruble benefited exporters, it was harmful to the economy in the long run.

He reiterated the Kremlin's official line by saying that it was not up to Russia to lift the sanctions, which, he conceded, had cost the country billions of dollars this year.

"We didn't bring in these sanctions and we shouldn't be the ones to cancel them, that is their business," Medvedev said, harshly criticising the United States, whose current administration he said is "behaving unreasonably and unpredictably."

"Our economy as a result of these sanctions has probably lost tens of billions of dollars," he said.

Finance Minister Anton Siluanov had earlier said that the Russian economy was losing some $40 billion a year over the sanctions.

"According to the calculations of our economists, the European economy has lost 40 billion euros only from cancelling contracts with Russia," Medvedev added in the interview.

Among the most high-profile EU-Russia deals to be hit by sanctions is France's delivery of two warships to Russia.

Although the deal was done before the EU imposed sanctions on Russia, Paris came under intense pressure to scrap the accord, and has since said it would postpone the decision on whether to hand over the Mistrals.

But he lost much of his influence after he willingly renounced his claim to a second term and swapped jobs with Putin.

Incensed by Putin's announcement of the job swap and subsequent fraud-tainted parliamentary elections in December, tens of thousands took to the streets in protests on a scale unprecedented since the turbulent days of the early 1990s.

A subsequent clampdown on freedoms dealt a huge blow to Russia's protest movement but some analysts say that mounting economic trouble could trigger a new wave of protests in the near future.