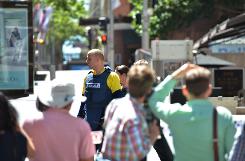 Members of the police tactical unit deploy near the cafe

02:28 GMT - Courts closed - Justice NSW @NSWJustice is tweeting that all law courts in the central business district are closed for the day

02:11 GMT - Obama briefed - Colleagues in Washington are reporting that President Barack Obama has been briefed on the hostage situation

02:08 GMT - Mid-year outlook - The PM says that as part of the busisness as usual Abbott Treasurer Joe Hockey and Finance Minister Mathias Cormann will shortly release the Mid-Year Economic and Fiscal Outlook as planned.

01:57 GMT - PM speaks - “Australia is a peaceful open and generous society and nothing will change here.”

“The ordinary business of government must go on and it will go on,” says Abbott

01:55 GMT - motivation - Prime Minister Tony Abbott is speaking to the media saying "We don't yet know the motivation of the perpetrator, we don't know whether this is politically motivated."

"Some nearby offices have been evacuated as a precaution. Anyone else in the area encompassing Hunter, George, Elizabeth and Macquarie streets bordering Martin Place is directed to remain indoors and away from open windows. Anyone in the vicinity but outside that area is free to leave their buildings.

"Police urge members of the public to remain calm and note that an appropriate police presence is in place.

"Police urge the media to be responsible in their reporting. Speculation can cause unnecessary alarm. We will attempt to keep you updated and police will release more information when it has been confirmed."

01:43 GMT - trapped in building - ABC news is tweeting that an unknown number of people are trapped in the building above the cafe where the hostages are being held.

Police are evacuating those above the cafe - including a baby - by ladder.

NSW Police comment on their website:"Police are dealing with an armed incident and specialist officers are attempting to make contact those inside a café."

01:33 GMT - jihadists - Australia has been on high alert after the government raised concerns that citizens who have fought alongside jihadists in Iraq and Syria could return home radicalised and capable of carrying out attacks.

01:27 GMT - Transport impact - Transport in the heart of Sydney has been impacted, with trains not stopping at Martin Place and buses operating in the area have been diverted, causing gridlock on other roads in the city.

Sydney police are saying on Twitter: “Buses that normally travel across the Sydney Harbour Bridge are terminating at North Sydney Railway Station.”

"This is obviously a deeply concerning incident but all Australians should be reassured that our law enforcement and security agencies are well trained and equipped and are responding in a thorough and professional manner," he has told the media.

01:15 GMT - Muslim leaders - The president of the Lebanase Muslim Association, Samier Dandan, has told ABC that Australian Muslim leaders are meeting online now to see if the community can help with the unfolding crisis.

Dandan says it is not known who is behind the siege and whether there are any links to the Australian Muslim community.

"But regardless we have a hostage situation. Whether he is someone who belongs to the Australian Muslim community or not, we are still waiting for information to be provided by police and based on that if there's something the Muslim community can do or assist, we are there."

01:12 GMT - Opera house - An "incident" at the nearby Sydney Opera House has also been reported, although police will not say whether it is related to the ongoing siege.

New South Wales police spokeswoman has told AFP: "The police are responding to an incident at the Opera House," adding that no further details were available.

Reports say the Opera House had been evacuated.

01:07 GMT - Situation unfold - A newsroom of the Australian TV station Channel Seven is opposite the café.

"We raced to the window and saw the shocking and chilling sight of people putting their hands up against the panes of glass at the cafe," he tells the Australian Broadcasting Corporation. "This was just extraordinary."

01:01 GMT - WELCOME TO AFP’S LIVE REPORT on the hostage crisis in Sydney, Australia. An unconfirmed number of people are being held in a café in the heart of the government and business district of Sydney.

Witnesses on the scene report that an Islamic flag has been displayed in a window of the Lindt café in Martin Place, which has been cleared of people and surrounded by armed police.

Reports say as many as 20 people could be in the cafe and that there are at least two gunmen, although police have not confirmed this.

Witnesses have also reported hearing loud bangs that sounded like gun shots. We will continue to bring you live updates as the situation unfolds.

A Dutchman has been arrested in Phuket on a charge of illegally catching parrotfish in the waters of Mu Koh Phi Phi National Park in Krabi province, after a TikTok video of him spearfishing drew outrage from local residents.

Former Malaysian navy chief Ahmad Ramli Mohd Nor was charged with three counts of criminal breach of trust in relation to a 9 billion ringgit contract for littoral combat ships.

Space mission shows Earth's water may be from asteroids: study