Laos has warned Thai Airways International (THAI) to stop breaching its air service agreement by deploying its budget airline subsidiary for flights to the neighbouring country that are designated for the parent. 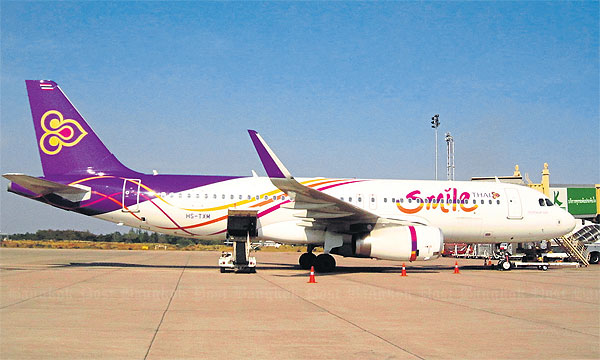 A THAI Smile A320- 200 aeroplane sits on the tarmac at Khon Kaen airport. Laotian aviation authorities want such aircraft repainted in the parent’s certified colours to operate into Laos. (Photo by Boonsong Kositchotethana)

The Lao Civil Aviation Department recently served notice to Thailand's flag carrier that it must comply with the accord by operating its Bangkok-Vientiane flights using aeroplanes displaying the THAI livery and employing a crew certified by the parent airline.

The order came after Lao authorities found THAI Smile had been flying the route in place of the parent airline, an act considered a violation of the rights originally extended to THAI.

In the eyes of the authorities, THAI Smile, despite being wholly owned by THAI, is a different airline, one with its own livery and crews and which has not been approved by Lao officials.

THAI has taken the unauthorised liberty of having its budget airline operate on the route on its behalf, essentially to bring down costs and be more competitive, the authorities said.

The parent thought it could get around the regulation by applying its own TG call sign for Bangkok-Vientiane service even though THAI Smile flights are officially supposed to carry the WE designation.

THAI feels that with the exception of the THAI Smile motif painted on the front section, THAI Smile's Airbus 320-200s look enough like THAI's aeroplanes, with their tails painted a deep purple and featuring the parent's distinctive logo.

Laotian officials think otherwise but have reportedly been lenient with THAI's practice, which has reportedly been going on for a while, until it finally raised the issue formally.

In a letter dated Nov 24 but received only recently by THAI, the Lao Civil Aviation Department told THAI it must have the five single-aisle A320-200 jets painted in the THAI Smile colours fully redone in the parent's colour schemes as a means of regulatory compliance.

Second, flight crew members serving the routes must be authorised or assigned by THAI itself to ensure their professional training meets THAI standards, according to the letter, which was seen by the Bangkok Post. THAI Smile's flight crews are trained by a separate entity indirectly related to THAI.

The department did not say what consequences THAI would face if it failed to comply. But industry sources said THAI ran the risk of having its THAI Smile aeroplanes banned from taking off or landing at Wattay airport in Vientiane.

"Then a small matter would become a big issue between Thailand and Laos," a source with more than 30 years' airline experience warned.

The THAI/THAI Smile issue was raised because Thailand made full use of the traffic rights, in terms of flight frequencies and passenger volumes, granted by Laos for flights to that country.

THAI and Bangkok Airways are the only Thai-registered carriers given rights to operate between the two countries. The flag carrier flies twice a day to Vientiane and four times a week to Luang Prabang.

THAI shares closed yesterday on the Stock Exchange of Thailand at 14.80 baht, up 30 satang, in trade worth 93.8 million baht.

A wave of airline strikes and flight cancellations is deepening Europe’s transport crisis, disrupting travel plans just as the region’s peak summer season gets under way.

Bangkok governor Chadchart Sittipunt on Saturday demonstrated that people can now take off their face masks in open spaces by taking his morning run at Lumphini Park without a mask.