Top Kremlin critic Alexei Navalny was detained by police on Tuesday after he violated his house arrest to join a protest in Moscow over a guilty verdict against him and his brother in a controversial fraud case. 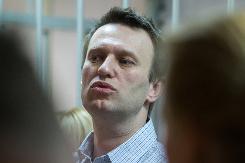 Russian anti-Kremlin opposition leader Alexei Navalny speaks as he attends the verdict announcement of his fraud trial in Moscow, on December 30, 2014

Dozens of other people were also detained as hundreds gathered in central Moscow after the charismatic 38-year-old opposition leader called on Russians to take to the streets against President Vladimir Putin's regime following Tuesday's court ruling.

A Moscow judge found both Navalny and his brother Oleg guilty of embezzlement and sentenced them to three and a half years, but while Navalny's sentence was suspended, his younger brother, who is not involved in politics, was ordered to serve the time behind bars.

The sentence against his 31-year-old brother infuriated Navalny and was interpreted by his allies as an attempt to muzzle him and thwart his presidential ambitions ahead of a 2018 election.

Navalny, who was put under house arrest earlier this year, managed to escape and took a selfie on the Moscow metro as he sought to join the crowd bound for Manezhnaya square.

But a policeman grabbed him and hauled him into a van.

"That I am detained means nothing," he wrote on FireChat. "They cannot detain everyone," he said, asking people to stay put and brave the freezing temperatures of minus 15 degrees Celsius (five degrees Fahrenheit).

"It's not about me or my brother but about the outrageous hideousness that is happening in our country," he told Echo of Moscow radio.

Russia's prison service said it was notifying the court about Navalny's house arrest violation -- a move that could see his suspended sentence converted to a term behind bars.

The United States said it was "troubled" by the conviction and accused Moscow of muzzling critics.

Over 130 other people were detained at the rally, which did not receive the required authorisation from city hall, according to OVD-Info, an NGO that monitors arrests.

Navalny described Tuesday's verdict as "the most mean and disgusting possible" and said Putin's regime was using a strategy to "torture and torment the relatives of its political opponents."

"This regime has no right to exist, it must be destroyed," he said.

Washington expressed its concern at the sentencing of the Navalny brothers.

"The decision is a disturbing development in our view, and it appears to be designed to further punish and deter political activism," said State Department spokesman Jeffrey Rathke.

- Thorn in Kremlin's side -

Navalny has become a major thorn in the Kremlin's side over the last few years.

He first built a massive support base on the Internet as an anti-corruption blogger, then rallied tens of thousands during the 2011-12 anti-Putin protests and most recently came second in last year's Moscow mayoral race after a grassroots campaign against the Kremlin's candidate.

The Navalny brothers were accused of defrauding French cosmetics company Yves Rocher of nearly 27 million rubles (more than half a million dollars at the exchange rate at the time), although the firm has said that it suffered no damages.

Prosecutors had asked the court to jail Alexei for 10 years and Oleg for eight.

Tuesday's hearing was brought forward two weeks in a move seen as a tactic to avoid massive protests and make it impossible to request authorisation for rallies.

The session took only about 15 minutes -- unusual for Russia where judges usually read sentences for hours.

"What are you jailing him for, what sort of disgrace is this? This is to punish me even more?" Navalny yelled, slamming his fists on the table, as the judge announced that Oleg, a father of two young children, would be jailed.

Observers say that because of Navalny's prominence the verdict could not have been issued without Putin's personal approval.

However, his spokesman Dmitry Peskov said Putin merely followed the case in the media.

A spokeswoman for EU foreign policy chief Federica Mogherini said the verdict "appears to be politically motivated" and stressed the "importance of judicial decisions to be free from political interference."

In a country dominated by Putin for years, observers see Navalny -- a maverick politician who exposed the exorbitant wealth of the elite -- as the one figure who can pose a threat to Putin.

A talented orator, he is handsome, with a photogenic wife and two children, an unassuming middle-class lifestyle and he lacks ties to the 1990s political scene that many Russians despise.

Navalny, who has said he intends to run in the 2018 election, has seen half a dozen criminal cases lodged against him and his allies, which he says are politically motivated.

Tuesday's verdict came with Putin facing a plunging ruble and an economy teetering on the edge of recession as Moscow is locked in a standoff with the West over Ukraine.

"In essence, Oleg has been taken hostage, and Navalny will get discredited due to innocent people sent to jail because of him," opposition politician Boris Nemtsov wrote on Facebook.

Human Rights Watch said the decision was aimed at "intimidating other critics of the government".