PARIS - A stunned and outraged France was in mourning Thursday, as security forces desperately hunted two brothers suspected of gunning down 12 people in an Islamist attack on a satirical weekly. 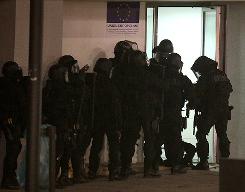 Police are seen during an operation in the "Croix-Rouge" suburb of Reims, northern France early January 8, 2015

The massacre, the country's bloodiest attack in half a century, triggered poignant and spontaneous demonstrations of solidarity around the world.

Shocked people from Moscow to Washington rallied in their tens of thousands under the banner "I am Charlie", in support of press freedom and the controversial Charlie Hebdo magazine that has repeatedly lampooned the Prophet Mohammed.

Declaring Thursday a national day of mourning -- only the fifth in the last 50 years -- President Francois Hollande called the bloodbath "an act of exceptional barbarity" and "undoubtedly a terrorist attack".

Nearly 24 hours after the brazen daylight assault, the masked, black-clad gunmen -- who shouted "Allahu akbar" ("God is greatest") while killing some of France's most outspoken journalists as well as two policemen -- were still on the loose.

Police issued arrest warrants for Cherif Kouachi, 32, a known jihadist convicted in 2008 for involvement in a network sending fighters to Iraq, and his 34-year-old brother Said. Both were born in Paris.

The two men were likely to be "armed and dangerous," authorities warned.

Interior Minister Bernard Cazeneuve said seven people had been detained in the hunt for the brothers, and a judicial source who refused to be named added these were men and women close to the suspects.

Prime Minister Manuel Valls, meanwhile, told French radio the two suspects were known to intelligence services and were "no doubt" being followed before Wednesday's attack.

The frantic manhunt stretched into the night with search-and-seizure operations in Strasbourg and towns near Paris, while in northeastern Reims, police commandos raided a building later scoured by white-clad forensic police.

Hamyd Mourad, an 18-year-old suspected of being an accomplice in the attack, handed himself in, with police sources saying he had seen his name "circulating on social media".

Hollande ordered flags to fly at half-mast for three days in France and was due to convene an emergency cabinet meeting at 8:30 am (0730 GMT).

A minute's silence will be observed across the country at midday, after which the bells of Paris's famous Notre Dame cathedral will sound out across the capital.

"Nothing can divide us, nothing should separate us. Freedom will always be stronger than barbarity," said the president, calling for "national unity."

Even before the attack, France, home to Europe's biggest Muslim population, was on high alert like many countries that have seen citizens leave to fight alongside the radical Islamic State group in Iraq and Syria.

At around 11:30 am on Wednesday, the killers stormed the central Paris offices of Charlie Hebdo during an editorial meeting and picked off some of France's best-known cartoonists in cold, military-style executions.

Outside the building, chilling amateur video footage showed the attackers calmly approaching a wounded policeman as he lay on the pavement and then shooting him at close range.

Many witnesses said the scene was "like a movie" and some described "rivers of blood" flowing in the streets of the City of Light.

One witness said: "I saw them leaving and shooting. They were wearing masks. These guys were serious.

"At first I thought it was special forces chasing drug traffickers or something," said the man, who declined to give his name.

"It's awful, it's awful," said Anne Pajon, a Scot who has lived in Paris for 20 years, as she waited at the busy Saint Lazare train station.

"It's scary. What's worrying is that we can't do anything. That's terrorism -- it hits whatever we do. We cannot prevent it."

More than 100,000 people across France poured out into the streets, many brandishing "jesuischarlie" banners and holding aloft pens to voice support for freedom of expression.

Charlie Hebdo has long provoked controversy, mocking many religions with provocative drawings, a practice that has outraged some Muslims whose religion forbids depictions of the Prophet Mohammed.

US President Barack Obama led the global condemnation of what he called a "cowardly, evil" assault. Pope Francis described it as a "horrible attack" saying such violence, "whatever the motivation, is abominable, it is never justified".

Visiting the scene, the imam of the Drancy mosque in the northern suburbs of Paris, Hassen Chalghoumi, called the shooters "barbarians".

"They want terror, they want fear. We must not give in. I hope the French will come out in solidarity and not against the Muslim minority in Europe," he told AFP.

Meanwhile, cartoonists reacted as they know best, composing biting and mocking satirical drawings against what editorialists said was an attack on the very foundations of democracy.

Among the cartoons that went viral online was one by Australia's David Pope: a picture of a gunman with a smoking rifle standing over a body, bearing the caption "He drew first".

France's media erupted in fury at the massacre of their colleagues, with the daily Liberation running the headline 'We are all Charlie" -- a line repeated in many other papers and echoed online with the hashtag #JeSuisCharlie.

Business daily Les Echos urged people to face up to "barbarism", publishing the last cartoon written by one of those killed in the attack.

"The hooded bastards declared war on France, on our democracy, on our values," the paper said in an editorial.

Charlie Hebdo gained notoriety in February 2006 when it reprinted cartoons of the Prophet that had originally appeared in Danish daily Jyllands-Posten.

Its offices were fire-bombed in November 2011 when it published a cartoon of Mohammed under the title "Sharia Hebdo".

Even being dragged to court under anti-racism laws did not stop the publication, which in September 2012 again drew the Prophet, this time naked.

The attackers on Wednesday shouted "we have avenged the prophet, we have killed Charlie Hebdo", according to prosecutors.

The assault took place on the day the latest edition of Charlie Hebdo was published.

It featured a cartoon of an armed militant noting "Still no attacks in France. Wait! We have until the end of January to send greetings". That was a reference to France's tradition of wishing someone a Happy New Year before January 31.

Editor-in-chief Stephane Charbonnier, known as Charb and who had lived under police guard after receiving death threats, was among those killed, along with the police officer assigned to protect him.