MANILA — The courts did not grant Chatto Realuyo a divorce when it allowed her to end her marriage, 10 years after her husband moved out. They can't. They best they can do is say the marriage never happened.

The Philippines is the only country in the world - aside from the Vatican - where divorce is forbidden, a testament to the enduring power of Roman Catholicism that has flourished since Spanish colonizers imposed it nearly 500 years ago. 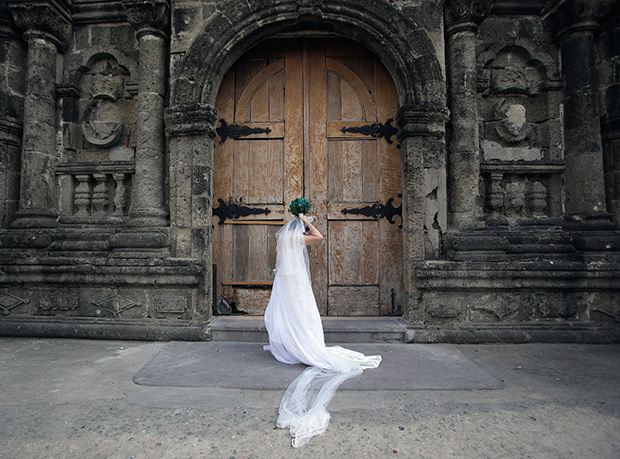 A Filipino bride arranges her gown before her wedding at a Catholic church in Manila. The Philippines is the only country in the world — aside from the Vatican — where divorce is forbidden, a testament to the enduring power of Roman Catholicism that has flourished since Spanish colonizers imposed it nearly 500 years ago. (AP photo)

Visiting Pope Francis, the church and many of its followers in this Southeast Asian Catholic stronghold of 100 million believe strongly in the indissolubility of marriage. But a growing number of Catholics would support a change.

The independent pollster, Social Weather Stations, found in March 2011 showed 50% of Filipinos surveyed favoured divorce for couples already separated so that they can remarry, while 33% who opposed it. In 2005, the two sides were about even. Catholics account for about 80% of the country's population.

Ms Realuyo, a 58-year-old insurance broker, said she would have gotten a divorce if it had been available back in 1989 when she filed for an annulment. She said her husband didn't provide for their family, used drugs and was uncooperative in counselling sessions.

She was jubilant and celebrated with an ''Independence Day'' party when the civil annulment was approved in 1991, 12 years after her church wedding and 10 years after her husband left their home.

The annulment will allow Ms Realuyo to remarry in civil ceremonies, but not in Catholic rites because her marriage has not been annulled by the church. If she remarries outside the church or has a live-in relationship, that would be considered immoral by the church and she would be denied communion, a form of excommunication.

Ms Realuyo paid her lawyer about 7,000 pesos, less than $1,000 at the time, to take care of her annulment petition 25 years ago. It has gotten substantially more expensive, too costly for many in this impoverished nation to afford. 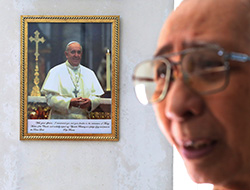 The Rev Ruben Tanseco, founder of the Centre for Family Ministries, talks beside a picture of Pope Francis, at the centre in suburban Quezon city, Philippines. (AP photo)

For 23-year-old Kate Briola, who wants to formalize her separation from her husband who allegedly was a verbally abusive alcoholic, getting a civil annulment would be very expensive.

"Of course, I want an annulment, but now that I have a child, it's no longer my priority," she said.

Under the country's Family Code, marriages can be ended three ways: through legal separation, which does not allow remarrying; an annulment; and a third, through what is called ''a declaration of nullity of marriage.''

An annulment cuts the marital bond because it was void from the beginning for reasons such as fraud, or the couple were too young to marry, or were married by someone with no authority.

Despite the rising cost, there has been a 40% increase in annulment petitions in recent years - from 4,250 in 2001 to 10,528 in 2012 - according to the Office of the Solicitor General, which represents the government in such cases.

Lawyer Evalyn Ursua, a women's-rights advocate, said the large annulment expenses deprive the poor of a way out of an oppressive or violent relationship. She said annulment also requires "intellectual dishonesty" in declaring there was no marriage at all, even for couples who were married for years and had children.

"If the Catholics don't want to have divorce, fine. But don't deprive the others. Don't impose the Catholic dogma," Urusua said. 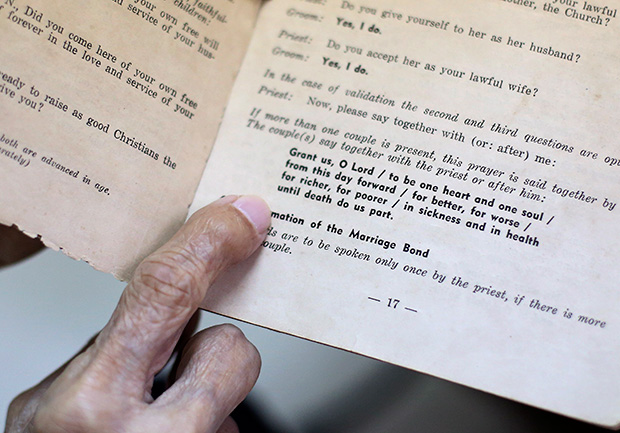 In this Jan. 7 photo, the Rev Ruben Tanseco, the founder of the Centre for Family Ministries, shows the text of a sacramental marriage vow that is recited by couples married in a church at the centre in suburban Quezon city, Philippines. (AP photo)

Professor Sylvia Claudio, a medical doctor and clinical psychologist who headed the Centre for Women's Studies at the University of the Philippines, said she has counselled numerous battered women who want divorce to get away from their violent husbands.

Ms Claudio said that while some Catholics take pride in the Philippines being virtually the last holdout against divorce, the near-universal recognition of divorce suggests that "there must some rationale that (it) is good for all, across cultures and nations."

The church recently lost a significant fight in the Philippines when President Benigno Aquino III pushed through a reproductive-health law that goes against Catholic doctrine by allowing the government to provide artificial birth control to the poor.

Mr Aquino, however, has said divorce is not a priority for his administration. The Gabriela Women's Party, which holds two seats in the House of Representatives, has introduced divorce bills three times over the past decade, most recently in 2013, but they've gotten just one congressional hearing, said Representative Emi de Jesus.

"What we are stressing here is the right to enter into and get out of a contract if the marriage is irreparable," she said.

Max de Mesa, a former Roman Catholic priest who is now chairman of the Philippine Alliance of Human Rights Advocates, cites the Universal Declaration of Human Rights provision that says that men and women "are entitled to equal rights as to marriage, during marriage and at its dissolution." He said divorce does not solve all marital problems, but "it gives at least the chance to make the decision to liberate oneself." 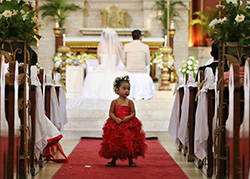 A Filipino girl joins a wedding ceremony at a Catholic church in Manila. (AP photo)

"If within a relationship you are being oppressed, divorce becomes an expression of standing for dignity," he said.

For the Rev Ruben Tanseco, the 83-year-old founder of the Centre for Family Ministries, divorce is a closed issue.

"I am holding to the very covenant that the husband and the wife made when they got married: until death do us part,"the Jesuit priest said.

He said that even if divorce is legalized, Catholics will not resort to it if they want to remain Catholic, and those who do should be ready to face the consequences.