Shiite militiamen in control of Yemen's capital seized President Abdrabuh Mansur Hadi's chief of staff Saturday in a new challenge to his leadership of the violence-plagued country. 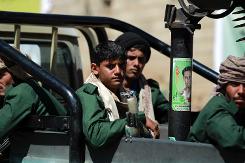 Members of the Shiite Huthi movement man a checkpoint in Sanaa on January 3, 2015, as Huthi supporters attend the celebrations of the Prophet Mohammed's birthday in the Yemeni capital

The abduction of Ahmed Awad bin Mubarak, who heads a "national dialogue" on Yemen's political transition, came shortly before he was to attend a meeting on a proposed new constitution opposed by the Huthi militia.

Yemen has been dogged by instability since the ouster in 2012 of strongman Ali Abdullah Saleh, with the Huthis and Al-Qaeda battling to fill the power vacuum.

The Huthis are widely believed to be backed by Saleh.

Al-Qaeda in the Arabian Peninsula (AQAP) also has a record of acting well beyond its Yemeni base, and claimed responsibility for the January 7 attack on French satirical magazine Charlie Hebdo that killed 12 people.

The Charlie Hebdo attack was carried out by French brothers Said and Cherif Kouachi saying they acted on behalf of AQAP.

The former visited Yemen in 2011, according to Yemeni security sources, while Cherif himself told French media he also travelled to the country that same year.

"There are around 1,000 Al-Qaeda militants in Yemen from 11 Arab and non-Arab countries," national security service chief General Mohammed al-Ahmadi told reporters on Saturday.

Mubarak and several companions in his armoured car were stopped by militiamen in Huthi tribal clothes in the southern Hada district, a witness said.

He was seized and driven to an unknown location, an official from the national dialogue secretariat told AFP.

Ahmadi said talks were under way to secure his release.

In a statement, the militia said Mubarak's detention was necessary to prevent a UN-brokered agreement between the presidency and them in September "from being broken," without clarifying Mubarak's role.

The "national peace and partnership agreement" was signed in September as the Huthis overran Sanaa.

It called for forming a new government and appointing Huthi advisors to Hadi, and demanded the Shiite militiamen withdraw from key state institutions they had seized.

Mubarak's kidnap came just before a meeting of the national dialogue secretariat to present a draft constitution that stipulates dividing Yemen into a six-region federation, which the Huthis oppose.

Political sources told AFP representatives of the Huthis and Saleh's General People's Congress party walked out of a meeting headed by Hadi on Saturday to discuss the political process, including the constitution.

The Huthi statement warned Hadi of an unspecified "series of special measures" they are planning, adding that "President Hadi must not cover up corruption."

Hadi has struggled to assert his authority since the Huthis seized Sanaa.

In a speech published on state news agency Saba, Hadi said: "Our problems must be solved by wisdom and common sense, and without resorting to violence such as kidnappings and killings."

"Those who are attempting to hamper (the political process) must realise that we are on the right path and they cannot hamper this national process," saying that such parties could be receiving "foreign orders."

Yemen has repeatedly accused Shiite-dominated Iran of backing the Huthis.

Mubarak, a southerner, was one of the representatives in the dialogue of the Southern Movement, which seeks autonomy or secession for the formerly independent south.

Hadi named him as prime minister in October, but he turned down the job following strong opposition from the Huthis and from Saleh's party.

Mubarak's abduction comes a day after one of two Huthis appointed by Hadi as advisors last year announced he was quitting because his advice had been spurned.

Since their takeover of the capital, the Huthis have pressed their advance into mainly Sunni areas south of Sanaa, where they have met deadly resistance from Sunnis, including Al-Qaeda loyalists.

The turmoil has raised fears that Yemen, which neighbours oil-rich Saudi Arabia and lies on the key shipping route from the Suez Canal to the Gulf, may become a failed state similar to Somalia.

NASA to deflect asteroid in key test of planetary defense