PHNOM PENH — Cambodia's Prince Norodom Ranariddh was elected Monday as president of the royalist Funcinpec party, nine years after he was toppled as its leader. 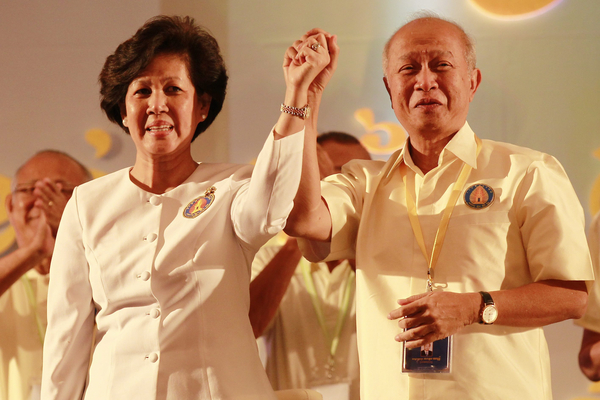 Cambodian Prince Norodom Ranariddh (right) and his younger sister Princess Norodom Arunrasmey, former president of the Funcinpec party, hold up their hands during a congress in Phnom Penh on Monday. (EPA photo)

The election was held at the party's congress in Phnom Penh, with the participation of 2,200 members.

The 71-year-old prince, a son of the late King Norodom Sihanouk, led Funcinpec from 1993 until 2006 when he was toppled, prompting a split in the party.

He announced his retirement from politics in August 2012 but reversed that decision in June last year, saying he was returning "to mobilise royalists, to protect royalists and to serve the nation".

Speaking at Monday's party congress, the prince said he could not "stay idle and ignore" matters of critical importance to the nation as well as the social problems faced by the Cambodian people. He also promised to do what he can to safeguard the country's territorial integrity and bring it prosperity.

Arunrasmey, who prior to the election was the party's president, said bringing Ranariddh back into the party fold is intended to reunite the country's divided royalists and promote "monarchism, Sihanoukism and nationalism".

On Jan 2, Nhek Bunchay, who prior to the election was the party's secretary general, revealed that the deal to restore the prince to his position was actually brokered by Prime Minister Hun Sen, who he said seeks reconciliation among the royalists.

In the 2013 election, the Cambodian People's Party of Hun Sen won 68 seats in the 123-seat legislature, while opposition Cambodia National Rescue Party, led by Sam Rainsy and Kem Sokha, won the remaining 55 seats.

Ranariddh was "first prime minister" in a dual-premier, power-sharing arrangement with Hun Sen after the 1993 general election, only to be ousted by the latter in a bloody military coup in 1997.

Biden pushes to get Democrats over finish line on spending package