Obama sees US turning the page on recession and war
World

Obama sees US turning the page on recession and war

Barack Obama will say America is turning the page on years of war and economic hardship Tuesday, in a populist-tinged State of the Union address that puts him on a collision course with Republicans. 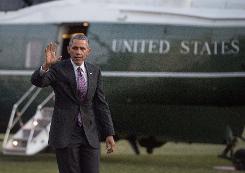 Police patrol on Capitol Hill in Washington DC on January 20, 2015 before US President Barack Obama delivers the State of the Union

Emboldened by a stronger economy and better approval ratings, Obama will set out his vision for a new chapter in US history, one that ushers in a fairer economy with a better shake for the middle class.

"We are fifteen years into this new century. Fifteen years that dawned with terror touching our shores; that unfolded with a new generation fighting two long and costly wars; that saw a vicious recession spread across our nation and the world," he will say, according to excerpts.

"It has been, and still is, a hard time for many. But tonight, we turn the page."

Obama is to herald the "growing economy, shrinking deficits, bustling industry, and booming energy production" that have also helped revive his political fortunes in the Autumn of his presidency.

"We have risen from recession freer to write our own future than any other nation on Earth. It's now up to us to choose who we want to be over the next fifteen years, and for decades to come."

Teeing up coming legislative and election battles as the 2016 election to replace Obama comes into view, he will also dare Republicans to oppose proposed tax hikes for the rich.

Under Obama's reforms, the wealthiest 0.1 percent of people -- those earning more than $2 million per year -- would face higher taxes.

"Will we accept an economy where only a few of us do spectacularly well? Or will we commit ourselves to an economy that generates rising incomes and chances for everyone who makes the effort?" he is to ask.

Obama's Republican opponents brand such talk as little more than class warfare and will use their majority in both houses of Congress to make sure the plans never become law.

Republican Senator Joni Ernst, who has been tasked with rebutting Obama's speech, is to say that Americans are still suffering from "stagnant wages and lost jobs."

She will also decry Obama's "failed policies" and "a mindset that gave us political talking points, not serious solutions."

This will be Obama's first State of the Union address since Democrats lost control of the Senate in November mid-term elections.

But Obama has rebounded since the vote as unemployment dropped below six percent, the stock market returned to near record levels, growth picked up to its highest clip in 11 years and gas prices plummeted for motorists.

In recent months, Obama has used his executive authority -- opponents would argue stretched it to the limit -- to circumvent Republican opposition, imposing and opposing some policies by decree.

The new Congress has made one of its first priorities to approve the Keystone XL oil pipeline from Canada, an idea Obama has said he will veto out of hand if experts say it will damage the environment.

On the foreign policy front, he has announced moves to normalize relations with Cuba and pushed on with talks with Iran on its disputed nuclear program, in defiance of conservatives.

Polls suggest Americans support the Cuban outreach and Obama will hammer home his advantage by inviting newly freed US citizen Alan Gross, a former prisoner in Cuba, to the speech.

The State of the Union falls the day before US envoys begin new talks in Havana on restoring ties, and Obama will push Congress to end the trade embargo.

Obama was also to call on Congress to authorize the use of force against the Islamic State jihadist group.

"In Iraq and Syria, American leadership – including our military power – is stopping ISIL's advance."

"This effort will take time. It will require focus. But we will succeed."

"No foreign nation, no hacker, should be able to shut down our networks, steal our trade secrets, or invade the privacy of American families, especially our kids."