Greece's new government dramatically escalated its battle with the country's international creditors, saying it would no longer meet with EU and IMF auditors and rejecting fresh loans offered for February. 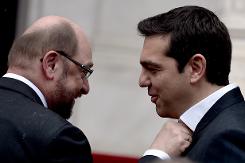 Greek Finance Minister Yanis Varoufakis speaks during a press conferense after his meeting with the Eurogroup chairman in Athens on January 30, 2015

Athens had been promised another 7.2 billion euros ($8.1 billion) in funds from the European Union, the IMF and the European Central Bank if it completed reforms required by its lenders by February 28.

But despite warnings Greece would shortly run out of money, hardline Finance Minister Yanis Varoufakis said his government preferred to do without the new round of funds and instead renegotiate the entire bailout package.

"This government was elected on the basis of analytically questioning the very logic of the programme now being applied," he said, referring to the reforms and budget cuts demanded by Athens' international creditors.

"Our first act as government will not be to reject the logic of questioning this programme by requesting to extend it," he told a press conference.

In a New York Times interview earlier, Varoufakis made clear: "We don't want the seven billion euros.... We want to sit down and rethink the whole programme."

The leftist minister was speaking after talks Friday with Eurogroup chief Jeroen Dijsselbloem, the first between the anti-austerity government and the creditors behind Greece's huge bailout.

Varoufakis said Athens was willing to negotiate with its lenders but not with the so-called "troika" of EU, IMF and ECB auditors who he said were merely a "committee built on rotten foundations".

At a strained joint press conference after their meeting, Dijsselbloem, who leads the eurozone's finance ministers, warned: "Taking unilateral steps or ignoring previous arrangements is not the way forward."

Before arriving in the Greek capital, he had cautioned that the new government, led by Prime Minister Alexis Tsipras's hard-left Syriza party, has been raising expectations it cannot meet.

Tsipras was elected on Sunday on a platform of ending austerity and cutting Greece's debt in half.

"If you add up all the promises (made in the election campaign), then the Greek budget will very quickly run totally off course," Dijsselbloem said.

Theodore Pelagidis, a senior fellow at the Brookings Institution, said that despite the government's posturing, Greece would struggle without the new loans next month.

"There is no way that Greece will make it through February. The situation will be get worse every day, and at the forefront of the drama will be the country's banks," he told Bloomberg News.

Alexandre Delaigue, economics professor at the elite French military academy Saint-Cyr, said the prospect that Greece would be forced out of the eurozone had come a step closer.

"A solution where everybody saves face seems to be getting further away," he told AFP, adding: "Today, after this press conference, the possibility of a Grexit has increased."

Tsipras will make his first visit abroad as premier on Monday, when he travels to Cyprus.

He will also visit fellow eurozone members Italy and France next week as he starts the process of trying to renegotiate the deeply unpopular bailout, which was granted to avoid a financial meltdown in 2010.

Varoufakis will also begin a tour of European capitals next week, meeting his British, French and Italian counterparts.

But European Commission chief Jean-Claude Juncker said a reduction of Greece's 315-billion-euro debt linked to the bailout "is not on the radar".

"I don't think there's a majority in the Eurogroup... for a reduction of the debt," he told Germany's ARD television.

Sigmar Gabriel, Germany's vice-chancellor and also its economy minister, said he expected Greece to "stick to its commitments" for fiscal and economic reform made in exchange for the bailout.

Before Friday's talks, debt rating agency Fitch said Greece was still likely to reach a deal with its creditors but only after protracted talks damaging to the economy.

"There is a high risk that protracted and difficult negotiations will sap confidence and liquidity from the Greek economy," it said in a note.

Greek stocks lost another 1.59 percent on Friday, while yields on Athens 10-year bonds rose past 10 percent, a sign that jittery investors are losing confidence in Greece.

But Daniele Nouy, head of the European Central Bank's Supervisory Board, said despite the post-election turbulence, Greek lenders were "pretty strong".