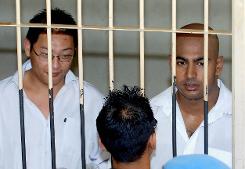 Australians Andrew Chan (L) and Myuran Sukumaran, members of the "Bali Nine" drug ring, are seen in a cell during their trial in Denpasar, Bali

Ms Bishop, who pleaded for the lives of Andrew Chan and Myuran Sukumaran in parliament Thursday, said the situation was tense as Indonesian authorities made plans to transfer the pair from prison to the site of their execution.

Vigils have been held around Australia, which does not support the death penalty, to plead for mercy and Ms Bishop said if they faced the firing squad it could influence whether Australians took holidays in Indonesia.

She warned Jakarta against underestimating the strength of feeling within the Australian public for the pair.

"I've been overwhelmed with emails and text messages, I know that people have been staging vigils and rallies," she said.

"I think the Australian people will demonstrate their deep disapproval of this action, including by making decisions about where they wish to holiday."

The Indonesian island of Bali is a key holiday destination for Australians.

Asked whether Australia would consider withdrawing its officials from Indonesia if the pair are executed, Ms Bishop said: "This is a matter still to be considered.

"My concern is that we want the lines of communication between our ambassador and the Indonesian government to remain open," she added.

Ms Bishop said she was not giving up hope on Chan and Sukumaran, the ringleaders of the so-called "Bali Nine" heroin smugglers who were arrested in 2005 and sentenced to death the following year.

But she noted that after five years of no executions in Indonesia, new President Joko Widodo had made it clear that "they will continue to execute those on death row".

The foreign minister said Australia would do everything it could to stop the executions in Indonesia, a near neighbour and a close trade and security partner.

"Executing these two young men will not solve the drug scourge in Indonesia," she said.

Australian artist Ben Quilty, who has become close to both men over the past four years, said the situation was grim after an Indonesian official said Thursday the pair would be transferred "as soon as possible" for their execution site.

Indonesia has said the prisoners will be executed outside Bali on Nusakambangan Island, which is off the main island of Java and home to a high-security prison. Six drug convicts were executed there last month.

"I think hope has sort of gone from them now and they are just trying to work out how they are going to cope with what's coming," Quilty told Fairfax radio.

"Yesterday was the first time I really saw Myu broken."