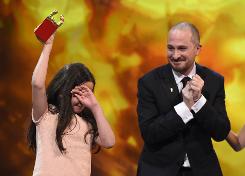 The niece of Iranian director Jafar Panahi holds the Golden Bear trophy she accepted in his place at the 65th International Film Festival Berlinale next to jury president Darren Aronofsky on February 14, 2015 in Berlin

Panahi, who is outlawed from travelling abroad and was absent from the festival, appears on screen in the film as a Tehran cab driver, swapping stories with the denizens of the city.

A mounted dashboard camera allowed him to film in secret, away -- at first -- from the prying eyes of the Islamic state's authorities.

The jury president, Hollywood director Darren Aronofsky, said Panahi had overcome restrictions that had the power to "damage the soul of the artist".

"His film is filled with love for his art, his community, his country and his audience."

Panahi was represented on stage by his young niece Hana Saeidi, who appears in the film, and she wept openly as she accepted the statuette.

The Silver Bear prizes for acting went to Charlotte Rampling and Tom Courtenay for their performances in the British drama "45 Years".

Rampling noted that her father Godfrey had won a gold medal at the 1936 Olympic Games in Berlin and that she had long dreamed of taking "the baton from him".

"Well, I think this Bear has done the trick," she said with a smile.

Courtenay later told reporters he was pleased to make a film featuring an older generation.

"There are lots more old actors than there used to be. We all live longer," he said.

"There are bound to be films that reflect that."

The slow-burn drama by Andrew Haigh shows a couple on the eve of their 45th wedding anniversary whose marriage begins to founder when the husband learns the body of his long-dead first love has resurfaced.

Chilean drama "The Club" by Pablo Larrain about defrocked paedophile priests given refuge from justice by the Roman Catholic Church claimed the runner-up jury prize.

Jude's "Aferim!" is a black-and-white Balkan Western about a 19th century constable and his son dispatched to track down a runaway gypsy slave. The film explores the roots of contemporary prejudice against Roma.

Szumowska's "Body" tells the story of a Warsaw widower and his anorexic daughter who seek the help of a therapist who believes she can communicate with the dead.

Chilean documentary "The Pearl Button" by Patricio Guzman, a searing indictment of his country's brutal history as told through the image of a single relic, won best screenplay.

"Taxi" is the first Iranian film to win the Golden Bear since Asghar Farhadi's drama of entangled relationships, "A Separation", in 2011.

The 54-year-old Panahi's work is celebrated in the world's arthouses but outlawed in Iran where the regime considers his gritty, socially critical productions to be subversive.

He was detained for a documentary he tried to make on the unrest following Iran's disputed 2009 presidential election and officially banned from making more films for 20 years for "acting against national security and propaganda against the regime".

In "Taxi", Panahi himself offers his impressions of contemporary Tehran from behind the wheel of a yellow cab.

Each person he offers a lift has a story to tell, an axe to grind or an issue to debate about life in today's Iran.

The film builds to a chilling climax in which the extent and limits of the director's liberties are revealed.

Prizes at the 11-day Berlin film festival, which has a reputation for showcasing political cinema, can help propel a picture to global box office success and further honours.

Among award winners last year were "The Grand Budapest Hotel" and "Boyhood", both nominated for Oscars later this month, and the gritty Chinese thriller that won the Golden Bear, "Black Coal, Thin Ice".