Shelling and mortar fire thundered around a flashpoint east Ukraine town on Sunday despite a new, shaky ceasefire largely observed along the rest of the frontline separating Ukrainian forces and pro-Russian separatists. 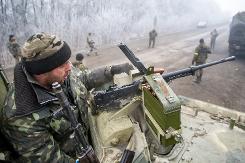 Ukrainian servicemen relax on a road near Svitlodarsk, approaching the town of Debaltseve, on February 15, 2015

Sporadic bombardments targeting the key railway hub of Debaltseve -- where thousands of Ukrainian soldiers are mostly surrounded by the rebels -- were audible from kilometres (miles) away, but they were far less intense than before the truce came into effect at 2200 GMT Saturday.

Ukraine's military said that across the entire conflict zone, its soldiers' positions had come under fire from the rebels 60 times on Sunday. Debaltseve, it said, was "the main hotspot".

His assertion was backed up by observers from the Organization for Security and Cooperation in Europe (OSCE), who are mandated to monitor the truce.

The separatists said the ceasefire was largely holding, but accused the other side of occasional breaches.

OSCE representatives added that rebels have blocked their access to Debaltseve, which they will try again to reach on Monday.

AFP journalists near Debaltseve heard fire from big artillery guns, mortars, machine guns and snipers throughout the day. They were unable to get into the town itself because of the hostilities.

"There was firing all night and all day," said a rebel commander, Oleg, at an insurgent base in an abandoned mine near Debaltseve. Around him tanks were stationed in firing positions.

"The ceasefire is just to organise a rotation resupply of the troops," he said, as heavy weapons and small arms fire kept up a racket of detonations.

"We're just waiting for the order to launch the assault on the town, which will no doubt happen in a few days," Oleg added.

The truce is meant to be the first step of a peace plan aimed at ending 10 months of conflict that have claimed more than 5,480 lives.

The next phase is scheduled to see both sides pull their heavy weaponry back from the frontline within 48 hours of the ceasefire coming into effect. Theoretically, that would be from 2200 GMT Monday if the truce is deemed to be fully in force.

A prisoner exchange would then be made, and Kiev is afterwards meant to start retaking control from the rebels over its 400-kilometre (250-mile) border with Russia, following local elections in the east by the end of the year and negotiations over greater autonomy for separatist-held territories.

But there is little trust on all sides, with a high degree of scepticism after the collapse of a similar ceasefire agreed in September.

In Paris, French President Francois Hollande declared that observance of the ceasefire was "generally satisfactory" despite some "local incidents".

Hollande -- who along with German Chancellor Angela Merkel had helped mediate the ceasefire agreed on Thursday -- was speaking after a four-way telephone conversation with Merkel and the leaders of Ukraine and Russia.

Ukrainian President Petro Poroshenko emphasised in the call that the ceasefire should be implemented all along the frontline, "including the area of Debaltseve", according to a statement from his office.

Poroshenko has warned the truce was "threatened" by the separatist action in Debaltseve, seen as the weak link in the ceasefire, while rebels have warned any attempt to move the 5,000 government troops they claim to have cornered there would be countered.

International pressure is high on both sides to stick to the latest deal and prevent an escalation of the worst East-West crisis since the end of the Cold War.

Washington and Kiev accuse Moscow of fuelling last-gasp fighting that occurred just ahead of Saturday's ceasefire by pouring arms across the border to help rebels grab territory. Moscow denies the claims.

The EU has warned it could toughen its sanctions on Russia if the situation fell apart, while US President Barack Obama has warned he could start supplying arms to Ukraine if the truce collapses.

Russian President Vladimir Putin was said to have reaffirmed his commitment to the peace deal in the call with Merkel and Hollande.

On Sunday Britain's ambassador to the UN said the 15 members of the United Nations Security Council will engage in more consultations on the ceasefire in eastern Ukraine and were not yet ready to adopt a mooted resolution on the truce.

"We are not in a position to vote on a text today, but there is an interest in having a Security Council reaction to the Minsk Agreement," said envoy Mark Lyall Grant.

A spokesman for UN Secretary-General Ban Ki-moon said the ceasefire represented "a desperately needed respite to civilians trapped in the area", but said "serious concerns" remained over the situation in Debaltseve.