BERLIN - Germany's anti-euro AfD party was Sunday set to win its first seats in a western state, boosting the populist group which has emerged amid the eurozone crisis to the right of Angela Merkel's conservatives. 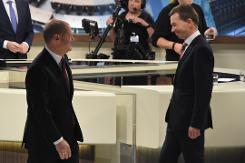 Bernd Lucke (R), leader of the Alternative for Germany (AfD), shakes hands with Hamburg mayor Olaf Scholz of the Social Democrats (SPD) in Hamburg on February 15, 2015

The Alternative for Germany scored about six percent in the city-state of Hamburg, just above the five-per cent threshold to enter parliament, public broadcasters projected.

Since it was formed two years ago with a call for Europe's top economy to ditch the euro, the AfD has entered three state assemblies in the former communist east, a region which still lags behind the west in terms of jobs and growth.

"Now we have shown that we can also be successful in a liberal, cosmopolitan city like Hamburg," said party leader Bernd Lucke, a former economics professor at Hamburg University.

"We are very happy about this result because it is the fourth time we enter a state parliament," said Lucke, one of several AfD members who were elected to the European parliament last year.

Merkel's conservative CDU party, despite its strong popularity at the national level, scored its worst-ever result in the northern port city poll, a traditional stronghold of the centre-left Social Democrats (SPD), in an election fought on local issues and personalities.

The CDU won only about 16 percent, one of its lowest ever results nationwide, against over 46 percent for the SPD of popular city mayor Olaf Scholz, who said he would ask the ecologist Greens to form a governing coalition.

The AfD -- one of several European populist parties to arise amid the eurozone crisis -- was launched in early 2013 with a call for the "orderly dissolution" of the euro and for Europe's export powerhouse to return to the Deutschmark currency.

Lucke this month pointed to Greece's debt and austerity troubles and said he was grateful to left-wing Prime Minister Alexis Tsipras for having "stood up to show everyone in the EU that things simply can't continue as they are".

Some AfD leaders have also flirted with right-wing positions on immigration, law and order and family values, and voiced sympathies for the anti-Islamic PEGIDA movement that drew up to 25,000 people in street rallies last month.

Lucke denied the AfD had profited from media attention on immigration issues and the rallies of the so-called "Patriotic Europeans Against the Islamisation of the Occident", centred in the eastern city of Dresden, which have waned amid counter-protests, scandals and internal strife.

Merkel, now in her third term, regularly polls as Germany's most popular politician, and her CDU retains a solid lead over over 40 percent in polls nationwide.

However, the Hamburg result confirmed that the CDU does badly in local and regional elections in big cities, where voters cast their ballots on local issues and are less swayed by the star power of Merkel, sometimes dubbed "the queen of Europe".

"In the big cities, the Merkel party has suffered a string of debacles, with no change in sight," said conservative daily Die Welt.

The newspaper Frankfurter Rundschau also said that "the CDU has once again been left out in the cold in a metropolis. Adding to this weakness is the moderate success of the AfD.

"The question for future elections is whether the CDU needs to become more cosmopolitan and modern, or to enhance its conservative profile."

Around 1.3 million voters were called to the polls in Hamburg, which is also one of Germany's 16 federal states. Only about 55 percent of eligible voters cast their ballots.

The Greens won more than 11 percent and the far-left Linke party scored above eight percent.

The pro-business Free Democrats took seven percent, an electoral comeback after it failed to make the five-percent hurdle for seats in 2013 national elections.

TAIPEI: A US cabinet member was due to meet Taiwan's leader Monday during the highest level visit from the United States since it switched diplomatic recognition from the island to China in 1979, a trip that Beijing has condemned.

Outbound tours are not likely to return within two years, with a travel agents' association postponing an annual sales event until next year.