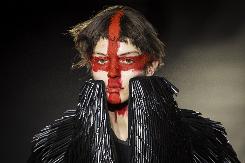 A model presents a creation from the Gareth Pugh collection at the Victoria and Albert Museum during the 2015 Autumn / Winter London Fashion Week, February 21, 2015

The models' faces were painted white with red crosses, the flag of England's patron saint, Saint George, whose legendary battle with a dragon is depicted in an altarpiece at the Victoria and Albert Museum where the show was held.

To a soundtrack of chanting crowds, the helmeted models strode down the runway in black leather breastplates worn over floor-trailing skirts with nipped-in waists or dresses adorned with black spikes that shimmered like chain mail -- or dragon scales.

On closer inspection, the spikes turned out to be tens of thousands of hand-cut plastic drinking straws, and the chanting was the sound of Pugh's home team, Sunderland Football Club.

"It's nice to mix the masculine with the very feminine -- these very big, almost Disney dresses with this very tough attitude, hats and make-up," he told AFP.

For all its reputation for creativity, London rarely sees such conceptual shows and Pugh's return to the city where he has long lived and worked has been welcomed by the fashion industry.

"There's been nothing like this since (Alexander) McQueen," said veteran fashion journalist Hilary Alexander. "It was very powerful; I thought it was fabulous."

The show opened with a short film of a woman cutting off her blonde tresses and smearing herself in red paint in the sign of the cross of Saint George before she is seemingly burned alive.

Pugh insisted it was less a depiction of English nationalism, which the flag is often used to represent, than an ideal of sacrificing oneself for a larger group, be that a nation or a football team.

The designer, whose clothes have been described as wearable sculptures, said it was also "about the rejection of a traditional idea of what is beautiful".

Pugh's show was a highlight of London Fashion Week this season, but he is only one among a number of stars who made their names in the city before spreading their wings abroad.

Jonathan Anderson, creative director of LVMH-owned luxury label Loewe, earlier Saturday showed his autumn/winter collection for his own line, J.W. Anderson, in which LVMH also has a stake.

It was bursting with colours and texture and the intention, he told reporters, was not to create "a look" but a series of outfits worn by individual women.

The tops, tunics and coats had 80s-style volume, with puffed out shoulders and sleeves, worn over cord straight-legged trousers tucked into knee-high leather boots in red, yellow and grey.

"We looked at moments of the early 80s, early 90s... that period of fashion was probably one of the most exciting moments in fashion," Anderson said.

Outfits were draped around the body, flared in a peplum waist, fashioned into a high collar, or belted, while Anderson also played with fabrics in what he called a "textural mash-up".

There were oversized coats in pink, brown or purple leather, others in grey and soft pink suede, as well as striped tops in green velvet or in shimmering metallic pink and purple.

The combinations created "something that felt against the ideas of conforming to a look and trying to challenge ourselves", Anderson said.