KIEV - Ukraine accused pro-Russian separatists Monday of using mortars and a tank to fire on government positions near the eastern port of Mariupol in clashes that lasted several hours, violating a nearly month-old ceasefire. 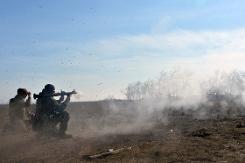 Fighters of the Ukrainian volonteer Azov battalion take part in military exercises not far from the southeastern city of Mariupol, on February 27, 2015

The militants fired on Ukraine's positions and were attempting to "force our contingents from Shyrokyne," a village about 10 kilometres east of Mariupol on the Azov Sea coast, the headquarters of the army's operations in the east said in a Facebook post.

The claims could not be immediately confirmed, but would constitute a serious violation of the February 12 peace deal signed in the Belarussian capital Minsk.

Mariupol, a steel-making city of 500,000, is the biggest urban centre in the conflict zone still controlled by Kiev. The frontline runs through Shyrokyne.

Underlining tensions over the truce, Ukrainian President Petro Poroshenko announced on state television that 64 soldiers had died since the ceasefire took effect. He said a total of 1,549 soldiers had been killed since the start of the war almost 11 months ago, in which the United Nations says more than 6,000 people have perished.

Meanwhile, NATO forces prepared for a major exercise in the Baltics, where Russia's involvement in the Ukraine war has jangled nerves.

US military officials said that deployment of some 3,000 troops had begun for the three-month Operation Atlantic Resolve. The exercise will see NATO forces working alongside their allies in Estonia, Latvia and Lithuania -- former Soviet republics that are now members of the Western alliance.

The United States also said Monday that it had delivered more than 100 pieces of heavy military equipment to the Baltic states.

The deliveries are intended to "demonstrate resolve to President (Vladimir) Putin and Russia that collectively we can come together," US Major General John R. O'Connor told AFP as he oversaw the delivery of the equipment in the port of Riga.

According to NATO, Russia has used its annexation of Ukraine's Crimea province to significantly boost its military presence in the region.

"What we've seen is easy to describe as the militarisation of Crimea," the alliance's top commander for Europe, General Philip Breedlove, said in an interview with Ukrainian channel 1+1.

"They've brought an air capability, they've increased their capability to project sea power from there," he said.

"Crimea has become very much a power projection platform," he said in an interview broadcast in Ukrainian on Sunday evening, of which AFP has obtained the original English version.

Many Ukrainians fear that any new offensive by the rebels would target Mariupol because of its strategic location and economic importance. The port was hit by a rocket attack in January that killed at least 30 civilians.

Four Ukrainian soldiers were wounded in the latest clashes, according to military spokesman Oleg Sushinky.

"Starting at 10:00 am (0800 GMT), the militants began to brazenly violate the Minsk accords, firing from 120-millimetre mortars and a tank at Ukrainian forces," he said.

It was impossible to immediately verify his claims.

Use of heavy weapons would violate the Minsk deal, under which both sides were supposed to withdraw mortars, rockets and other large calibre arms from the frontlines.

The defence minister of the self-proclaimed rebel Donetsk People's Republic, Eduard Basurin, told Russia's RIA Novosti website that rebels had not engaged in any offensive manoeuvres.

But a spokesman for the Azov volunteer battalion, which is fighting alongside government forces in Mariupol, said Shyrokyne had been the scene of sporadic clashes for several days.

International observers trying to monitor the ceasefire and weapons withdrawal have repeatedly complained that rebels are denying them access to outlying areas of Mariupol.