PARIS - Iranian filmmakers, at home and in exile, are breaking free from restrictions -- imposed both by their repressive government and by audience expectations -- to form a creative wave that is increasingly winning attention internationally. 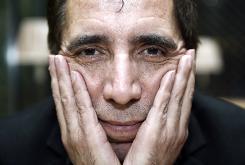 Iranian film director Mohsen Makhmalbaf poses on March 10, 2015 in Paris, a week before the release in France of his last movie "Le President".

The 2011 Oscar win for the Iranian movie "A Separation" snapped the focus on what was coming out of the Islamic Republic. But those in the industry emphasise that other notable productions go well beyond regime-approved portrayals of daily Iranian life.

From this year's Berlinale triumph of "Taxi" to a couple of fresh American-made movies including a dark comedy by the maker of the groundbreaking "Persepolis", and other films hitting screens abroad, the output is challenging Tehran's censors and easy categorisation.

"Iran has strong art and cinema" that will thrive no matter the adversity, exiled Iranian director Mohsen Makhmalbaf told AFP as he presented his latest movie, "The President", about a Central Asian republic's dictator toppled in a revolution and running for his life.

"There is hope for this cinema, more than for the life of the dictatorship in Iran. There is hope that one day we don't have this regime but we will have a good history of Iranian cinema."

"Taxi" by Jafar Panahi, a dissident director living in Tehran who is defying a ban by the government there on making movies for 20 years, is the latest big success. His film, smuggled out of Iran, took top prize at the Berlin film festival last month.

Despite the accolade, "Taxi" won't be be shown in Iranian cinemas. But it will certainly be seen anyway by Iran's legions of film fans who pay a dollar or two for bootleg DVDs in a thriving underground market.

That same market will also offer "The Voices", a less-lofty, more commercial movie by Marjane Satrapi, the Iranian-French director behind the award-winning 2007 black-and-white animation "Persepolis".

The new film, a macabre comedy starring Ryan Reynolds as a man pushed to murder by his talking pets, has nothing at all to do with her native country. It can be seen as part of a deliberate plan in her evolution to becoming a director first -- and not one exclusively associated with stories about Iran.

"What I had to say (about Iran), I said at length.... I don't like to redo what I know what to do because I feel like I'm not progressing enough," Satrapi told AFP.

Still, "Iran is in me, it's my country," she stressed, adding that the Islamic Republic's crackdown on Panahi and freedom of expression generally "particularly affects me".

Makhmalbaf, who now holds a French passport and lives in Britain, and who has survived what he said were four attempts by Iran's regime to murder him, says that after 10 years in exile, "I don't know where is my homeland... little by little I am less Iranian, honestly".

He, too, adheres to a more universal identity, shaking off any attempt to pigeon-hole him as concentrating on Iran, which he was forced to flee a decade ago.

"I am first a human being, second I am (an) artist, third I was born in Iran -- not the reverse."

Fellow director Panahi, he said, was "brave and has a lot of support, that's why he makes each year one film". Other aspiring filmmakers in Iran are in prison or in exile -- "but you don't know their names".

Given the oppression and censorship in Iran, some of the freshest visions starting to emerge about the country come from the postrevolutionary generation born and raised outside their parents' country.

Ana Lily Amirpour, an Iranian-American born in Britain, offers one such movie: a black-and-white "vampire western" about a trendy, bloodsucking Iranian dressed in Islamic garb titled "A Girl Walks Home Alone at Night".

The 2014 film, shot in California but set in an imaginary Iranian town and featuring Farsi dialogue throughout, has been well-received and opened up career horizons for Amirpour.

In the same vein as Satrapi and Makhmalbaf, though, she is not looking to an Iran-themed or -inspired next project.

Instead, she told the online magazine Indiewire, which writes on independent movies and movie-making, she's doing a film -- in English this time -- that she summed up as a violent "post-cannibalistic love story".

NAKHON SI THAMMARAT: A rubberwood processing factory in Bang Khan district of this southern province has been ordered closed for 14 days until Aug 7 after 221 workers were found infected with Covid-19, the provincial communicable disease committee announced on Sunday.

NEW DELHI: Swathes of India are battling deadly floods and landslides after heavy monsoon rains, just the latest example of how the vast country is on the frontline of climate change.

PHETCHABUN: Covid-19 testing continued on workers at a chicken processing plant in Bung Sam Phan district of this northern province on Saturday, with 3,117 testing positive for the virus so far.